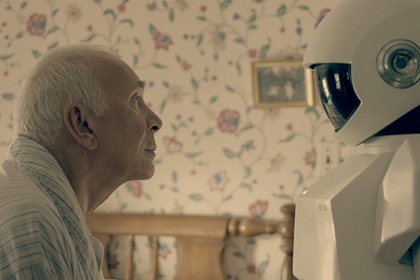 Robot and Frank supposedly takes place a few indeterminate years in the future, but it might as well be taking place on a different planet. Director Jake Schreier doesn’t go overboard with the sci-fi elements – in fact, the only thing at first that would suggest anything futuristic is a tiny car driving by in the background – but he uses behavior to create an otherworldly context for his drama.


Frank Langella plays Frank, an aging thief slowly going senile living alone in a big, comfortable house. He’s got nothing to do except visit the local library, where lovely librarian Susan Sarandon informs him (and us) that Frank is the place’s only customer. Meanwhile, Frank’s hippy-ish daughter (Liv Tyler) and his yuppy-ish son (James Marsden) worry about him in their own little ways. While she’s off traveling and doing good in Turkmenistan, the son gets Frank a robot helper (voiced by Peter Sarsgaard, who should do more robot voices) to cater to his needs. Frank’s reluctant at first, but sure enough he starts to bond with his machine friend. Before we know it, he’s using the robot to help plan an elaborate robbery of his neighbors.

Everything in Robot and Frank feels a little off. The characters don’t quite behave like real people. The film’s milieu, even though it seems like a fairly normal privileged suburb, doesn’t quite seem real. That sounds like a bad thing, but Schreier makes it work: His film regards its universe with the same low-key, bemused contempt that Frank does. And every once in a while we recognize little moments of recognizable behavior – it’s almost as if humanity itself is becoming quietly forgotten. Like we’re slipping into the same fog as Frank’s fallible memories.

I don’t know whether to call Robot and Frank a comedy or a drama. It’s certainly got its funny moments, but it’s also a staid, quiet little film that at times feels like a one-man show. Langella has a lot to do here, but not a lot of emoting; his Frank is a distant figure, and while the slow onset of dementia hasn’t completely taken him over, we can sense him floating away, ever so softly and with a minimum of fuss.

And yet the film never quite holds the weight of a drama. It certainly has myriad opportunities for symbolism and sentimentality, but Schreier and writer Christopher Ford keep things loose and airy. Thus, what the film loses out on pathos, and maybe even some narrative drive, it gains in honesty. It also affords the right to spring one quietly devastating emotional twist on us late in the final act – one of those out-of-the-blue moments that in a more cloying film would have been the last straw, but here makes everything shine a little bit brighter.
Posted by Bilge Ebiri at 10:47 PM