The Colossus of New York: Fathers and Sons 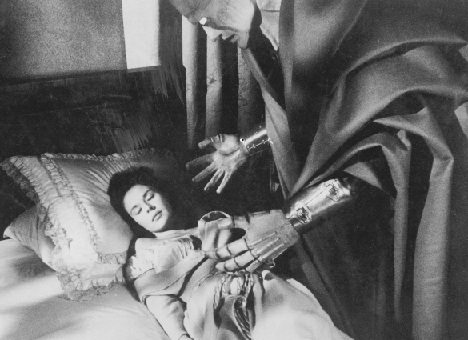 Sometime when I was 9 or 10, I developed a brief obsession with Eugene Lourie’s The Colossus of New York. That may not sound so odd now, but it was quite odd at the time; I wasn’t particularly into schlocky sci-fi movies as a kid (though I did once watch Revenge of the Creature so I could catch a glimpse of young Clint Eastwood). For some reason, I’d seen a magazine article (possibly in Starlog) that featured a still from Colossus, and the image stuck with me. Soon enough, the film showed up on TV. I recorded it and basically couldn’t stop watching it for a few weeks. And then, I did stop. And I didn’t really think about the movie again* until recently, when a new, very nice-looking Blu-Ray of it arrived from Olive Films.


Watching it again, I was surprised at how much I still liked the film. I mean, yes, it’s a silly little thing about a brilliant scientist whose untimely and sudden death pushes his (brilliant scientist) father to take his brain and insert it into a giant robot (built by his other, brilliant-but-not-quite-as-brilliant-as-the-one-who-died scientist son), with predictably catastrophic results. In true B-movie fashion, there’s an ineffectual and mostly absent hero, a locale bait-and-switch (the title and the poster promise something monumental and urban, but most of the film seems to take place in and around a palatial house/laboratory in the suburbs), and halfhearted stabs at social conscience. At one point the titular monster, without any explanation, starts shooting death rays from his eyes and incinerating all who cross him. 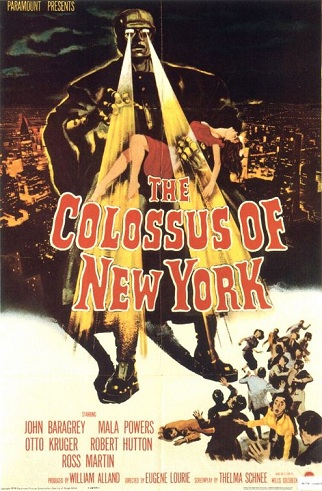 But there are some unexpected touches that distinguish it -- chief among them an eerily mournful piano score by Van Cleave, creating a mood closer to a Visconti psychodrama than an American cult thriller. Reportedly, the minimalist score was necessitated by an orchestra strike at the studio. But the music fits the strange, chamber-piece-like aesthetic of the film, too -- which itself might have been necessitated by what was surely a shoestring budget.

Colossus is also quite well-acted, particularly by Otto Kruger, playing the older scientist, whose strangely relaxed performance stands in sharp contrast to the stiff hysterics one usually finds in this type of film: He’s anguished, to be sure, but he seems – at first, at least – to know what he’s doing, and his demeanor gives us a kind of confidence in his powers, and in his intentions.


Plus, despite the ridiculousness of its cardboard self-importance, there’s something strangely compelling about the way the film’s climax plays out: The monster stands before the United Nations’ Isaiah Wall, firing at and liquidating all before him. I have no idea what any of this symbolizes, but the setting – stark yet strangely neoclassical – is genuinely haunting. You can tell from this finale that director Eugene Lourie had been a production designer. Indeed, he was a legendary one -- he worked on some of Jean Renoir’s greatest films, including Grand Illusion, The Rules of the Game, The Southerner, and The River, so the man learned from the best.

Something else struck me about the film, though, and I suspect it was what must have made such an impression on me back when I first saw it as a kid. The dead scientist has a young son, and the boy has to confront the transformation of his father into something horrific and unreal. (I recall seeing The Shining for the first time around this period as well, and it had a similar, though perhaps deeper, effect on me.) The idea of a parent being turned into a monster (and a somewhat pathetic one at that) filled me with dread, not to mention the fact that it’s the young boy who ultimately has to kill the monster, whom he still recognizes as his dad. And the aforementioned, curiously mournful mood of the film – the austere setting, the sad music, its eerie quiet -- seems to compound this unspeakable sadness at its heart. 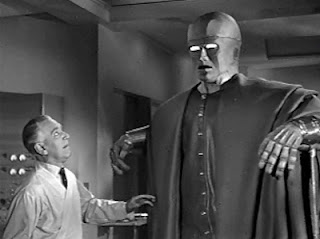 A couple more recommended pieces about the film: Lou Lumenick's informative take on it at the New York Post, here. And Erik Ulman going long on it for Senses of Cinema, here.

* I probably did briefly think about the film when Colson Whitehead’s book The Colossus of New York came out. That said, I haven’t read the book and have no idea if the film is ever mentioned in it. Probably not.