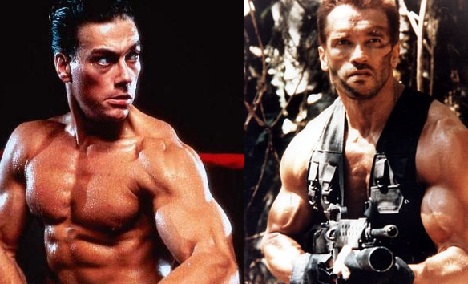 It was always a bit of a running joke that in the "canonical" Jean-Claude Van Damme films of yore, his Belgian accent had to be painfully explained in some elaborate way. In Lionheart, he was a deserter from the French Foreign Legion. In Maximum Risk, he was a French cop. In Hard Target, he played a Cajun (admittedly, the film did take place in the Bayou). In Double Impact, one of his characters had been raised in a Belgian orphanage in Hong Kong. And so on. I daresay it was one of the incidental pleasures of these films.

Ghosts in the American Machine: Amistad and Lincoln 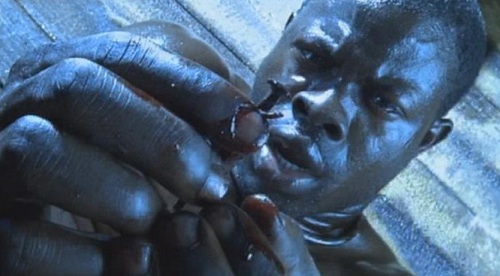 “Sir, this war must be waged on the battlefield of righteousness.”
“The what?”
- Amistad


I’ve always had a soft spot for Steven Spielberg’s Amistad. I think this puts me in some kind of minority, as that film is often Exhibit A in the Case Against Spielbergian Sanctimony. It certainly has its flaws – John Williams’s score, while lovely, swells a bit too much; Morgan Freeman gets a couple of dreadfully on-the-nose scenes; and “Give…us…free” is probably some sort of low-point for the director. But dear god, there’s so much to love here, too, quite aside from the fact that it’s a gripping, well-told historical-legal epic. Consider: The haunting scenes depicting the terror and bewilderment of the mutinous slaves as their ship comes closer ashore, or the extended flashback to the “Middle Passage” that occurs right at the mid-point of the film and spreads out in all directions like a gaping wound. And it has some of the finest performances Spielberg has ever directed, including Djimon Hounsou’s as the slave leader Cinque. The actor makes clear that the character’s fury is rooted not just in plain old anger or fear but in frustration: Cinque knows what’s going on but, a stranger in a strange land, lacks the language to express himself.

Amistad has been much on my mind lately, because it makes an appropriate companion piece with Lincoln. Not only are both films about slavery, but they’re about the specifically legal and political machinations by which the institution was maintained and then finally dismantled. Together, the two make a uniquely American diptych: They’re about a festering moral crime which needed the wedding of idealism and practicality, along with the efforts of good men, to be righted. 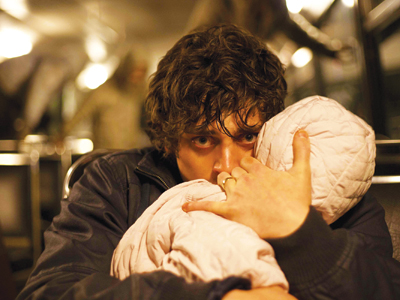 Citadel might be one of the bleakest horror films I've ever seen, and therein lies its terror. It opens on a very young pregnant couple, Tommy (Aneurin Barnard) and Joanne (Amy Shiels) moving into what appears to be a pretty uninspiring housing complex on some bleak semi-urban stretch of Ireland. But just as Tommy heads into the elevator to go retrieve more of their stuff from the car, a creepy gaggle of what appear to be children in hoodies attacks Joanne with syringes. She dies in the hospital, but not before delivering the baby. So now poor Tommy, left agoraphobic, paranoid, and almost catatonic by the experience (and let's not forget, he's still basically just a kid), has to raise a baby on his own. In abject poverty.Of course, it gets worse. The hooded kid-things come back for the baby (and sure enough, we eventually find out they're not kids at all). And Tommy, who also has to deal with the paralyzing psychic scars of his earlier experience, has to find some way to begin to cope -- to hide, or escape, or fight back. But he can't. They can find him wherever he is. Dear god, I'm getting shivers again just thinking about it.


To learn more about the Forgotten Films project, go here. 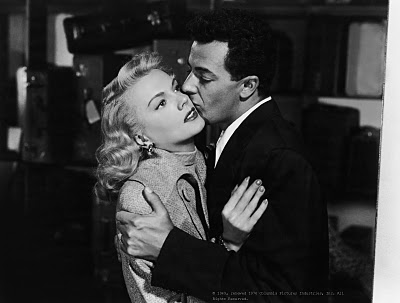 One doesn’t quite know at first what to make of 1949’s frazzled noir Shockproof. It was directed by Douglas Sirk from a screenplay co-written by Samuel Fuller: Two legendary auteurs, meeting here early in their careers, before the films for which they would later become known (and maybe even for which they’d be a little pigeonholed). No, it doesn’t qualify as the kind of colorful “woman’s picture” Sirk is famous for (Imitation of Life, All That Heaven Allows), nor does it resemble the zonked-out, surreal crime thrillers and war pictures (Shock Corridor, The Big Red One) Fuller would ride to immortality. Maybe that’s why, until recently, it was so little known. (There was a brief re-release of it a few years ago, and it can now finally be purchased on DVD.)

Compared to the florid, sublime expressiveness of Sirk and Fuller’s later work, Shockproof is a relatively subdued film. But it’s also an object of genuine wonder – in which Fuller’s characteristically uncompromising, extreme plotting is given shape and conviction by Sirk’s sophisticated mise-en-scene. The film begins with a pair of women’s legs, clad in ratty black stockings and shoes, walking among the clean, dapper shoes of a mid-day crowd on Hollywood Blvd. A brunette walks into a hair salon and gets her hair dyed blonde. We quickly learn that we’re watching Jenny Marsh (Patricia Knight), a beautiful, recent parolee who has just done time for murder. Her parole officer, the tough-as-nails Griff Marat (Cornel Wilde, embodying a typical Fuller character with a typical Fuller name), tells her, in a classic hard-boiled exchange, that she has to change her ways: ”You gotta change your brand of men.” “Who picks them for me, you?” “You won’t have any problem making friends. Just make sure they’re friends this time.”

Trouble is, Jenny still adores Harry Wesson (John Baragrey), a dapper gambler whose love was what got her in trouble in the first place. Griff warns both Jenny and Harry to stay away from one another. The lovebirds, however, will not be stopped; they begin to meet clandestinely. Meanwhile, Griff tries desperately to reform Jenny, eventually getting her a job taking care of his own blind mother. Sure enough, the straight-arrow parole officer also begins to fall in love with her, making advances she doesn’t quite know how to accept. Teased into domesticity, Jenny feels the lure of the honest life, even as Harry plots with her to continue her inadvertent seduction of Griff. 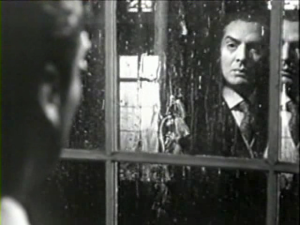 The complexity of the male-female dynamic in Griff and Jenny’s life is refreshingly unpredictable and pronounced. While Griff presents a tough exterior, as he falls more and more in love with Jenny he becomes a figure not of romance, but of compromised masculinity: In one bizarre scene, he shrieks and grabs her hand during a movie. Acting in bizarre, volatile ways, Griff is no Clark Gable; he’s an increasingly desperate, lovesick man. Jenny reduces him to a surprisingly raw, open state, even as her character remains harder for us to decipher. It’s a welcome meeting of the two filmmakers’ sensibilities: Griff is one of Sirk’s emotionally vulnerable male protagonists, crossed with one of Fuller’s typically extreme personalities.

While the narrative’s broad strokes feature all the moral certitude of 40’s American filmmaking, the film’s particulars can’t help but toy with our allegiances and emotions. Duplicity is rampant on both sides of the law here: To scare Jenny, Griff at one point sends her to a doctor, secretly a psychologist whose job is to judge whether she’s a habitual criminal or not. (Jenny sees through the ruse.) Likewise, even though Harry has all the oily charm of a classic noir snake, it turns out he actually does love Jenny: His office is dominated by a giant portrait of her. This blurring of boundaries reaches its zenith when Jenny’s gradual attraction to Griff and his upstanding life winds up reducing Griff to something of a criminal himself. The last act of the film finds Jenny and Griff on the run from the lawful society to which they had tried desperately to belong.

The byzantine web of manipulation featured in Shockproof sometimes feels like a test-run for the networks of desire Sirk would establish in later films like Written on the Wind and The Tarnished Angels, where one character’s love for another would often spur that object to covet another. The mise-en-scene here feels familiar, too: As Griff and Jenny’s story becomes more desperate, the compositions become increasingly unbalanced and unreal: One of the film’s later scenes is dominated by a giant oilrig, churning away in the background. Indeed, one could say that as Shockproof proceeds, the film’s two auteurs find their concerns coalescing perfectly: Sirk works his favorite theme of an individual collapsing under the stern eye and expectations of the society around them, while Fuller’s script follows an outlaw character trying anxiously to break free of the past (”That heater. It’s all corroded. Once corrosion starts with those things, eh, it’s finished.”) It may not be as expertly calibrated as one of either auteur's later films, but in its own way, Shockproof is unforgettable.