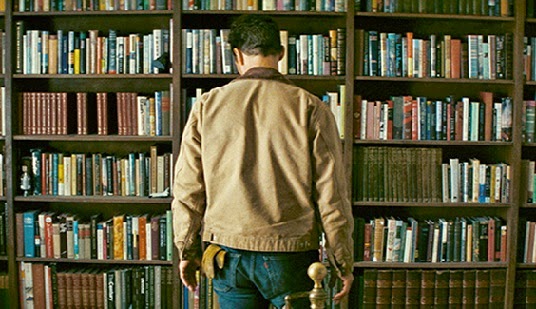 He wept to think that his dreamless slumber had spanned the entire lifetime of his first child.  When he could face the ordeal, he would summon the records that were waiting for him in the memory banks. He would watch his son grow to manhood and hear his voice calling across the centuries with greetings he could never answer…One day the pain would be gone, but never the memory.
- Arthur C. Clarke, The Songs of Distant Earth*


You don’t hear the word “subtle” tossed around much in discussions of Christopher Nolan’s Interstellar, but here’s something I found quite nuanced about its first hour: The sly hint of a smile that creeps on Cooper’s (Matthew McConaughey) face whenever he discusses the idea of going off into space. For all his insistence that he has a family he needs to care for, Coop can’t help but grin – ever so slightly – when Professor Brand (Michael Caine) tells him that he’s the right man for a daring new space mission. And watch his eyes as he tries later to justify leaving to his distraught daughter Murph: “They chose me, Murph,” he says, and he seems to be beaming – more a proud child than a regretful father.

Coop, whose very name suggests restlessness, and whose one previous attempt to go into space was aborted before he left the stratosphere, basically is a child. Early on, when Murph comes to the breakfast table with a broken lunar lander toy from her bookshelf, he says, “What’d you do to my lander?” Coop’s daughter walks around school with his old science textbooks. He’s a loving parent, but not a particularly attentive one. He forgets parent-teacher conferences; he doesn’t know how to deal with his daughter’s problems; he’s more excited about chasing stray Indian spy drones than he is about getting his kids to school on time. He’s a dreamer, out of his time and place.