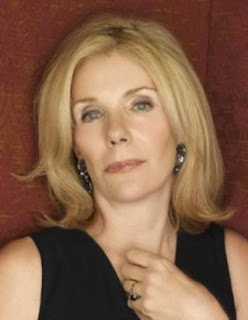 The passing of the great Jill Clayburgh prompted me to think back to what I consider to be her best film, Bernardo Bertolucci's much-maligned, little-seen Luna. I wrote about it some years ago, for a "Forgotten Films" series I did back when I was writing and editing Nerve's film blog The Screengrab. That blog isn't around anymore, and its archive doesn't seem to go too far back, so I hope they won't mind my repurposing my entry on Luna for this purpose. In truth, my piece is not so much about Clayburgh's (excellent) performance as it is about the film itself: But, well, there you go.


Bernardo Bertolucci isn't exactly a filmmaker who needs an introduction. One of the more resilient of the European directors who emerged in the 1960s, the man has signed his name to at least one acknowledged uber-masterpiece of world cinema (The Conformist, an influence to practically every major filmmaker of the 70s), one bona-fide filmic watershed (the scandalous Last Tango in Paris), one genuine film maudit (the star-studded, Hollywood-financed, five-hour Marxist epic 1900), and one acclaimed Oscar juggernaut (The Last Emperor, which marked his return to the international spotlight in 1987). Along the way, he also made a number of smaller, lesser-known films. Luna has always seemed to be an oddly overlooked work in his career. (Even though it's a Twentieth Century Fox production, it's never been available on any home video format.) Following on the heels of the director's very public fight with the producers of 1900, it was an attempt to make a smaller English-language film for an American studio. What emerged was a film perhaps even more sexually daring than Last Tango, and in its own way even more controversial than 1900. It was also, perhaps, one of the most personal, raw films Bertolucci ever made. The film begins with a typically Bertolucci-esque scene of Oedipal symbolism, and it's probably a good indication of what to expect from the rest of the film. A young baby is fed honey by his beautiful mother (Jill Clayburgh) in a seaside villa somewhere in Italy. The baby starts to cough, and cries. A man comes by with a crate of fish and begins gutting them. In the background, an elderly woman plays a piano. The mother, seemingly in defiance, puts on a pop record by Peppino di Capri, comes up to the man, and begins to do the twist with him. (The man holds a knife in one hand, and a fish in the other, giving their dance an oddly suspenseful edge.) The baby begins to walk away from this scene, but he gets stuck on some twine, so that as he walks the twine stretches back to the mother, a symbolic umbilical cord. The film then cuts to a twilight bicycle ride between baby and mother in which the baby looks up and sees her face framed with the full moon behind them. The moon (aka, la luna) thus becomes a symbol of the mother -- more specifically, of the child's connection to the mother.
After this intro, the film jumps ahead a number of years. The mother, Catherine, is a world-famous soprano living in Brooklyn with her businessman husband and her teenage son Joe (Matthew Barry, making quite an impression in his film debut). After the husband dies suddenly, Catherine takes Joe to Italy, where her neglect and self-absorption help lead him into heroin addiction. When Catherine realizes that her son is spinning out of control, she tries to intervene and to help him. Unfortunately, one of her ideas is to actually buy him heroin and to try to help him administer it. The desperation of this relationship between mother and son, which has always hovered on the edge of taboo, eventually leads to incestuous longings.
The scandalous nature of the interaction between Catherine and Joe tends to color most viewers' reactions to the film. But look closer and you'll see that Bertolucci creates a very subtle back-and-forth here, where the son's adolescent desperation helps unravel Catherine's own feelings of inadequacy and loneliness. Bertolucci's previous films had focused on father figures; in Luna we see how the absence of a father figure sends the respective parts of this family spinning off in their own directions. The man that died in Brooklyn is eventually revealed to not be Joe's real father; his real dad is that shadowy figure dancing with Catherine in the opening scene. Luna thus turns into a search for a father figure, an attempt to complete this broken nuclear family. 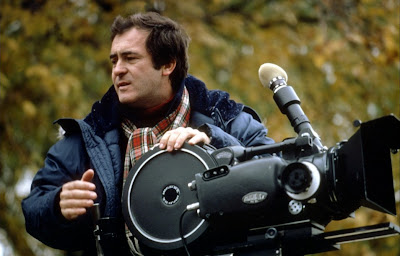 Luna is no masterpiece. Bertolucci's films have always juggled his fondness for remarkably sensuous visuals with more mundane story demands, and Luna tends to drift in the middle, when it becomes basically a chamber piece between mother and son, adrift in their ramshackle Italian villa. I suspect that Bertolucci is taking a page from Ingmar Bergman's book here, but he doesn't quite have Bergman's dramaturgical rigor. Perhaps, though, he possesses something just as valuable: a remarkable visual sense of mood and space that infuses even the simplest gesture or pan with meaning. As the camera tracks around this shadowy, stage-like space, Bertolucci maintains a palpable atmosphere of Freudian dread; we get the sense that anything is possible. It also helps that he has two very fine actors to carry much of the load.
The final act of Luna, in which Catherine and Joe visit the Parma area, where Catherine spent her youth and which is full of nostalgic meaning for her, gives the film extra resonance. For it is in these scenes that the film becomes clearly a journey into the director's own past. (He too is from Parma.) Catherine's visit to her old teacher, who doesn't remember her, recalls a similar scene in The Conformist. A character from The Spider's Stratagem, notable for his obsessive discussion of ham, pops up again as an innkeeper discoursing on salami. At one point, Catherine and Joe visit the same farm that was the setting for 1900; the bicycle used by Gerard Depardieu's character from that film is still leaning against one corner. There are echoes in earlier parts of the film as well: Joe leaves his gum under the railing of a balcony, just like Marlon Brando did at the end of Last Tango. There's even a nod to Bertolucci's mentor Pier Paolo Pasolini, who wrote the director's first film, in a scene where a homosexual (played by Pasolini regular Franco Citti) tries to pick joe up in a dive bar. Thus, we begin to sense that Catherine's journey into her past also serves that same function for Bertolucci.
Which raises a tantalizing question: Is Bertolucci indulging in a bit of self-criticism by depicting a character whose singular dedication to her art has alienated her from the rest of her world? Perhaps the director, reeling from the brutal battles (and resultant financial failure) of 1900 found himself doing some soul searching in its wake. Is Luna as much an act of exorcism for its director as it is a movie about a troubled soprano and her junkie son? The film, which ends on a powerful, optimistic note, suggests that art and the world are mutually dependent. Catherine needs her family to be together in order to sing again; but once she sings, she can help hold it all together. The film's final shot of Catherine, reaching towards the camera, her mouth wide open in song, might just be the most insistently personal image in all of Bertolucci's cinema. 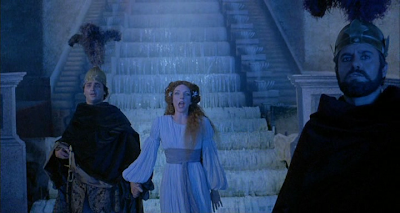 Of course, it didn't quite work out. While opening to some positive reviews, and despite Clayburgh's very strong performance, Luna didn't exactly repair Bertolucci's reputation. He returned to Italy and made another film in the early 80s, Tragedy of a Ridiculous Man, which also went nowhere. It wouldn't be until The Last Emperor that the director would become a brand name again. Luna is now rarely mentioned, and rarely ever screened. There are, however, legit-release European DVDs of it out there. But a film this beguiling deserves to be better-known, and you'd think that Fox would at least have tried to capitalize on Bertolucci's later successes by releasing the film. It seems like a pretty good time to bring awareness to this underseen gem.
Posted by Bilge Ebiri at 10:00 AM