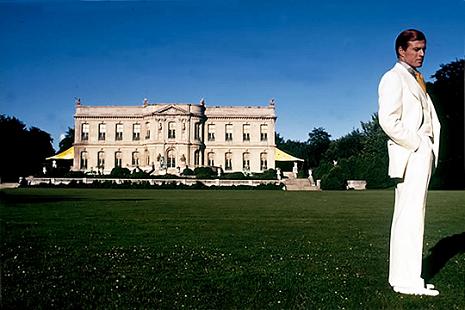 I’m finding it hard to not chime in on this whole Gatsby thing. As you’ve no doubt heard by now, Baz Luhrmann is planning a Great Gatsby adaptation with Leonard DiCaprio as Jay Gatsby and (probably) Carey Mulligan as Daisy Buchanan. And I guess Tobey Maguire as Nick Carraway, though I’m sure it’ll all change before cameras start rolling late next year or whenever the hell they finally do, if they do. Others have chimed in about how Gatsby adaptations never work properly -- everybody has their own reason why. I am about to share with you mine, but before I do that, I guess I should stick up a bit for the one party in this entire affair who always gets beaten up in these stories: Jack Clayton’s 1974 adaptation of The Great Gatsby, starring Robert Redford as Gatsby, Mia Farrow as Daisy, and Sam Waterston as Nick, scripted by Francis Ford Coppola and produced by Robert Evans, utilizing the full faith and credit of Paramount Pictures at its dizzying 1970s height. (The original Daisy was going to be Evans’s wife Ali MacGraw, who had recently become a huge star thanks to Love Story; then she made a getaway [har har] with Steve McQueen and, naturally, lost the part.)

Clayton has long been one of my favorite directors (rack a body count if you must to see his hard-to-find 1967 masterpiece Our Mother’s House) so it’s hard for me not to wince when his Gatsby gets summarily dissed -- although it does, in fact, have some huge flaws. But it is also about as perfect a realization of the Jazz Age as I can imagine: That may seem like more of a technical achievement (Costumes! Décor! Extras!) than a directorial or stylistic one, but I’d disagree: Clayton manages a pretty amazing balancing act here between the effervescence and speed of this world on the one hand, and the languorous, glacial emptiness of it on the other. The movie has to run both hot and cold to work, and it does, pretty consistently. This is exactly Fitzgerald’s world as I’d always imagined it. All the more impressive when you consider the fact that the author's language, particularly in this novel, was so impressionistic and elliptical. 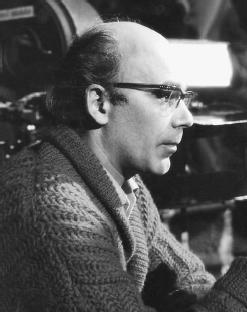 But ultimately, I can’t say the film works. I actually discussed this a bit in a piece about Fitzgerald adaptations I wrote for Bookforum a couple of years ago, when Luhrmann’s film was first announced. This news had come around the time of the release of The Curious Case of Benjamin Button, thus indicating a kind of Fitzgerald resurgence in Hollywood, after many years of folks assuming his stories wouldn’t work on the screen. Allow me to quote a relevant point:

Whether the curse [of Fitzgerald adaptations] has truly been lifted is, of course, up for debate. In an open memo to Luhrmann, Variety editor in chief Peter Bart breathlessly advised the director to reconsider his Gatsby adaptation, calling the novel "an expensive trap" and citing his own experiences as a Paramount executive during the production of Jack Clayton's reviled 1974 version... "The folks who shot Benjamin Button were smart enough to veer sharply away from the Fitzgerald short story," Bart noted in his memo, while citing Pauline Kael's pan of Elia Kazan and Harold Pinter's 1976 adaptation of The Last Tycoon, in which she lamented that "the dreamy crushes of Fitzgerald's doomed heroes . . . don't come across on the screen." (Kazan himself agreed, writing some years later that he "felt like kicking [the film's] hero in the ass.") Clayton's film was blasted for, among other things, failing to produce any sparks between Redford's Jay Gatsby and Farrow's Daisy Buchanan.

But the problem might have to do less with the chemistry of movie stars and more with a film culture that insists on seeing Fitzgerald's stories as swooning romances in the first place….[Clayton] had a real feel for the nuances of social hierarchy and the resentments it bred (his debut feature was the angry 1959 corporate drama Room at the Top), and the film, for all its impeccably adorned surfaces, gets Fitzgerald's subtly bitter portrait of the leisure class exactly right...But this director, too, fell into the love trap; he once called Gatsby and Daisy's relationship "the absolute essence of the word romance.

This great big screaming fact that presents itself to me every time I read the novel: The Great Gatsby is not a romance! Indeed, it is, in some ways, the opposite of a romance, the tale of a man obsessed with a woman who does not deserve his obsession. Daisy is a symbol of a world that Gatsby, for all his success and money, cannot really belong to. She's lovely, sure, but she's also empty and callous, and she basically belongs with her husband, the doltish aristocrat Tom Buchanan (played perfectly by Bruce Dern in the film, btw). 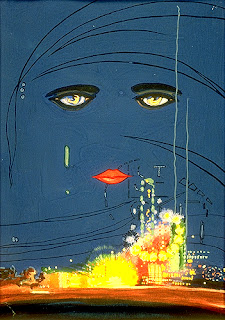 To try and present this story as a star-crossed romance between Daisy and Gatsby is a huge mistake. I mean, sure, you might be able to make a good film out of it, but it won’t be Gatsby -- and it won’t really be Fitzgerald, who was always more interested in obsession and compulsion and disillusionment than he was in love. Gatsby in particular is about the way that obsession, especially in the absence of the obsessed-upon-object, feeds on itself and moves mountains. What we’re seeing when we see Gatsby and Daisy reunited is an anticlimax. That’s kind of the point.

This is the true failing of Clayton’s film, and it’s a shame, too, because Clayton himself is one of the great cinematic poets of disillusionment. (The Pumpkin Eater comes to mind -- scripted, ironically enough, by that aforementioned Last-Tycoon-adaptation-failer Harold Pinter.) When people talk about the lack of chemistry between Redford and Farrow in Clayton’s film, I have to laugh, bitterly: Any honest depiction of this story pretty much ensures that there will be no chemistry between them.
Posted by Bilge Ebiri at 2:14 PM