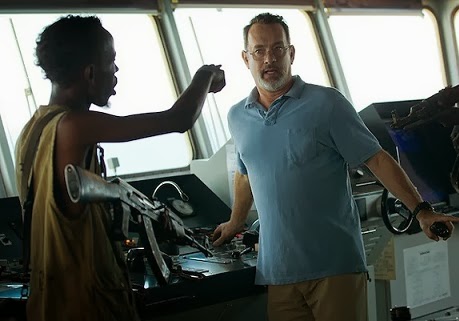 The real-life piracy thriller Captain Phillips opens with what feels at first like an inelegant bit of exposition. Preparing at home to embark on his next voyage, Captain Richard Phillips (Tom Hanks) checks the itinerary on his computer for his date of departure, and his destination: Mombasa, Kenya. You may find yourself asking: Wouldn’t the captain of a major cargo ship know where he’s headed well before the day he leaves? You may even have similar thoughts a couple of scenes later, as Captain Phillips listens to one of his crew members tick off the contents of their container ship, the Maersk Alabama. Again, shouldn’t he already know all this?

But what seems early on like awkward filmmaking convention soon reveals itself as the first hint that Captain Phillips, for all its expert, armrest-tearing suspense, is about more than just a ship taken hostage by Somali pirates. “Companies want things faster and cheaper…You gotta be strong to survive out there,” Phillips says in another early scene, and it becomes clear that, for all his protestations of strength, he is a mere cog in the engine of global commerce. It doesn’t matter if he knows where he’s going, or what he’s carrying. But soon enough, he and his men, speeding through international waters off the horn of Africa, are being pursued and boarded by a ragged band of pirates led by a gaunt, intense teenager named Muse (Somali-American actor Barkhad Abdi, in a remarkable debut performance). “Relax, Captain. Just business,” the young pirate tells the middle-aged sailor. He’s right.