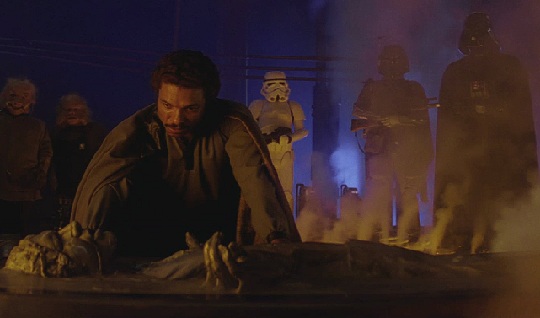 Okay, it’s hard to do five posts on the best action films of the 1980s and try and sneak in anything remotely surprising in there. (I guess the closest I got to was yesterday’s post on RoboCop, if only because most folks who know me know I’m fairly cool on Verhoeven.) And this, of course, is another no-brainer. It’s certainly the best of the Star Wars films (though a couple of the prequels are better than people like to give them credit for being). But it bears looking into, still: Why does The Empire Strikes Back continue to work so well?

For starters, it’s right there in the title: It’s one of the few action movies where the bad guys basically win, and we should never discount the way that our standard hero narratives have primed us for the release, the satisfaction, of seeing the good guys vindicated, avenged, saved, ennobled at the end of these stories. Obviously the popularity of Empire has since led to other filmmakers indulging in this sort of rug-pulling, but it’s hard to overstate the extent to which this film’s almost nihilistic finale feels at times like a rip in the space-time continuum of the hero narrative.

Secondly, with his initial emotional and professional investment in the first film richly rewarded, creator George Lucas was able to let his imagination truly run wild this time around. (Later on, he’d simply try to one-up himself, which often resulted in a lot of cool creatures and ships but fewer “wow” moments.) So, Empire is a film that has the speed, invention, and scale of Star Wars, but the richer inner life of a real movie -- and it ends on one of the great cliffhangers of all time. Remember, this was before the notion of a sequel became synonymous with a mere regurgitating of the original narrative. Back then, sequels – unless they featured James Bond, or Jason Voorhees – were new stories, not copies of the old stories. The idea of the franchise template hadn’t quite taken hold yet. To put it another way: Empire was made back when you could imagine someone saying the words, “Let’s not do that again. We already did that in the first movie.” Nowadays, you’re more likely to hear, “Let’s do that again. Because it worked so well in the first movie.”

Finally, director Irvin Kershner turned out to be an inspired choice for handling the soap-opera theatrics of Empire’s diffuse narrative, with the Han-Leia, Han-Lando, and Luke-Vader relationships all having their unique internal rhythms and psychological needs. Kershner wasn’t exactly a no-nonsense, point-and-shoot director – The Eyes of Laura Mars, for example, is a downright loopy exercise in style. But he also understood the power of restraint (far more so, I think, than Return of the Jedi’s Richard Marquand, or even the George Lucas who came back for the prequels).

A few months ago I analyzed the cutting in one of the film’s most devastatingly emotional moments, the scene where Han Solo is frozen in carbonite before his friends’ eyes, for Cinema Editor magazine. (The article is not on the web, alas.) Looking at the scene shot by shot, cut by cut, I was struck by how smooth it was, basically unfolding through a series of medium close-ups that let the melodrama play out very naturally, with a minimum of fuss. Kirshner and his editors create two emotional spaces here: In one, we get Darth Vader and Boba Fett, two fearsome, faceless figures who speak very little and whose emotions can’t be read. In the other, we see the horrified triumvirate of Chewbacca, Leia, and Han Solo. (Lando, Han’s old friend who betrayed him, is caught between the two groups.) This classical shooting and cutting, along with the restrained acting, actually enhances the heightened emotions of this scene, which may well be the high-point of the entire Star Wars narrative universe. And yet, on a cinematic level, it's all so beautifully basic.

But let’s also spare a word, here, for all the Star Wars films, for George Lucas’s vision and his deft storytelling shorthand. Whatever his flaws, the man has a genuine prophetic streak in him – not in terms of foretelling the future, but in simply understanding how to make other people believe his own fantasies. Ultimately, the greatness of The Empire Strikes Back comes back to that, too: In the simplicity of its filmmaking, in its no-nonsense shooting and cutting, we sense that it’s the one film in this entire series that recognizes the audience’s disbelief was suspended a long, long time ago. It knows that when you’re dealing with prophecy, sometimes it’s best to just get out of the way.