To Control Something That's Out of Control: On Tony Scott 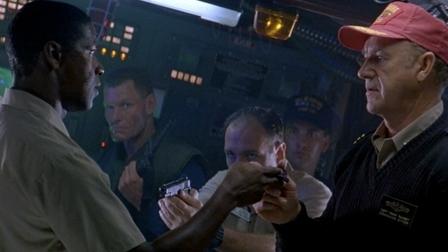 Tony Scott’s shocking suicide yesterday brought an end to not just one of the most influential careers in modern Hollywood, but also one of the strangest and most divisive. It’s interesting to note that, for a guy so often identified with blockbusters, he really had just a handful of genuine hits: Top Gun was huge, Beverly Hills Cop II was huge (mainly because it was a sequel to a box office phenomenon), Enemy of the State and Crimson Tide were huge-ish. Otherwise, films like Days of Thunder and The Last Boy Scout were generally seen as underperforming and not quite there. And True Romance, now correctly viewed as one of Scott’s best films, was basically a flop. Despite all that, his influence over not just other filmmakers but also male moviegoers of a certain age is undeniable.
Read more »
Posted by Bilge Ebiri at 1:00 PM 9 comments:

Almayer's Folly: Leave It All Behind 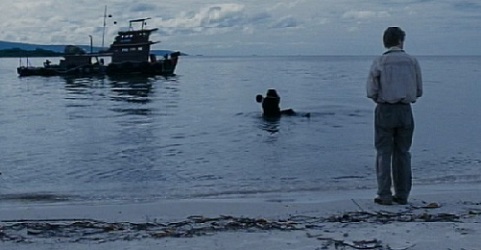 Chantal Akerman’s updated adaptation of Joseph Conrad’s novel Almayer’s Folly, which opens at Anthology Film Archives today, starts off with one of the most elegantly controlled and tense sequences I’ve ever seen. We see an open air night club somewhere in Asia. As random people go in and out, a shadowy figure moves into the frame and ominously enters the club. Akerman then follows the man from behind, slowly, as he makes his way towards a stage where a lounge singer, backed up by some awkward, scantily clad female dancers, lip syncs to Dean Martin’s “Sway.” The man watches the performance for an extended moment. Then, he goes onstage and stabs the singer, dragging the body offscreen. The music stops and the dancers all flee. All, that is, except for one -- a tall Eurasian girl with a distant look in her eyes, who continues her clunky dance as the empty silence gathers around her. A voice offscreen whispers, “Nina. Dain is dead.” The girl stops, and moves into close-up. And suddenly begins singing a religious song, in Latin, looking straight into the camera.

We may not know exactly what just happened, but we’re riveted nonetheless. This is what Chantal Akerman does at her best. She takes a moment and slows it down to such a degree that anything seems possible. Some directors like to hold their shots to give the viewer space and time to contemplate and explore. But Akerman’s not an analyst. She’s a hypnotist. She uses shadow, composition, and sound – just listen to this film sometime, with its mesmeric use of water and rustling reeds, its drifting waves of classical music and timeless pop – to pull us into this wild, twilight world.
Read more »
Posted by Bilge Ebiri at 3:00 PM 5 comments: