The Wolf of Wall Street: Performance, Transaction, and the Big Sell 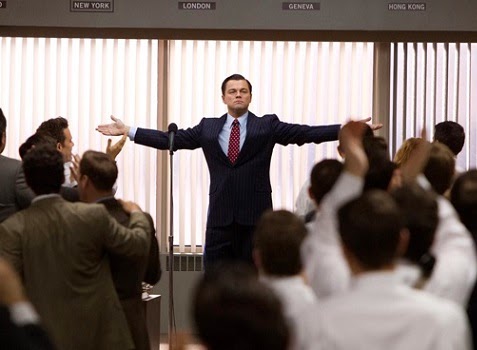 Martin Scorsese loves to watch Leonardo DiCaprio. I guess we’ve known that for some time, but it never quite hit me as it did during The Wolf of Wall Street. We can argue all day over whether this is an attempt to remake Goodfellas or whatever (it isn’t), but there’s one thing that’s pretty clear to me: This is as much one of Scorsese’s concert docs (Shine a Light, The Last Waltz, etc.) as it is one of his narrative epics. Jordan Belfort, the real-life “Wolf of Wall Street,” didn’t just become famous for his crooked financial practices; he was also renowned for his revival-like, inspirational speeches full of blustery bullshit to his workers. He sells stocks with messianic fervor; then he sells selling stocks with messianic fervor. It’s a perfect subject on which to hitch an extended DiCaprio concert. Half the movie is just him performing in front of people, and much of the rest of it is people reacting to him. There are even a couple of scenes one could call dance numbers.

(Spoiler alert for the rest of the review, to the extent that there can be spoilers for this movie...)


The performance, the transaction, the sell. They’re all interconnected. Early on, when he’s hiring a group of his old neighborhood drug dealer chums to help him build up his company, Jordan goes around a table asking them to sell him the pen that’s in his hand. He then gives it to his pal Brad (Jon Bernthal), the one guy in this bunch who really understands selling. Brad promptly asks Jordan to write his name down on a napkin. “I don’t have a pen,” Jordan replies. “Supply and demand!” Brad crows. It’s a perfect encapsulation of what the whole film is founded on.

That transactional quality extends to the weird instances of bodily mortification in the film, too. I haven’t been able to shake these scenes. We know from Raging Bull that Scorsese understands self-abuse better than most other filmmakers. But here it’s more than just the self; it’s everybody. People as physical beings get put through the wringer here – be it through violence, or sex, or drugs, or other types of physical humiliation. Once he has money Jordan abuses his body with abandon. He also abuses others. The first time we see him, he’s throwing little people at a Velcro dartboard. Later, he and his coworkers argue over whether it’s okay to turn the little people into bowling balls. During one of his earliest pep talks, they get one of their office workers to have her head shaved in front of them. (Jordan announces that she’s going to get a ton of money for letting them do this to her. And what’s she going to do with that money? Get a boob job.) It’s not so much that money gives you power. It’s that people will break themselves, turn themselves into objects, for it. And once they have it, they will break themselves some more. So much so that after a certain point you wonder if maybe it was all about the breaking all along – a longstanding Scorsese theme. Money is just another Scorsesean excuse for self-destructiveness. 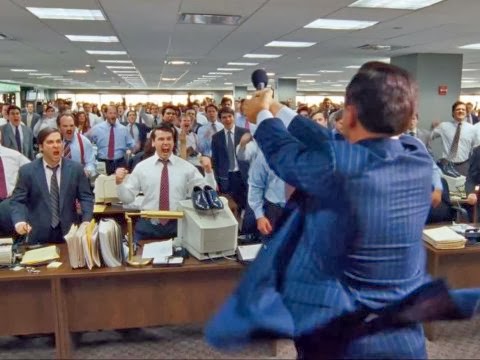 Take one of Belfort’s final speeches to his troops – the one that starts off with him bidding adieu to the company but turns halfway into a declaration that he’s not leaving. He singles out one of his long-serving brokers, Kimmie (Stephanie Kurtzuba), a woman who now wears Chanel and Armani suits. She wasn’t always like that, he tells us. Together, they remember that when Kimmie first came to work for him, she had to ask Belfort for a $5000 advance so she could pay her son’s tuition. The otherwise blustery and foulmouthed woman tenderly recalls that Jordan gave her $25,000 instead. Yes, it’s a touching moment. And yes, DiCaprio plays it perfectly – I mean perfectly – Elmer Gantry-ing it up with just the right combination of snake-oil salesman and genuine pathos. But could the tears in Kimmie's eyes be for the person she used to be? The transformation is stark. Neither of these people needs money anymore. Kimmie, with her thousand dollar suits, clearly doesn’t. And mega-millionaire Jordan Belfort certainly doesn’t. So why doesn’t he leave? Why does he stick with the bullshit company he founded? Because it’s not even money or prosperity that he’s selling anymore. It’s the sell itself.

In some ways, these cosmic ambitions work against some of The Wolf of Wall Street’s more mundane aims. At times it seems to want to be a financial industry expose/satire/whatever, but that doesn’t quite work: Stratton-Oakmont was not exactly a representative Wall Street firm, and Belfort keeps declaring himself the outsider, the guy who wants in. Scorsese has bigger fish to fry – more spiritual points to make, as above – but the script occasionally seems to want to drag him back to a more specific kind of social satire and/or history.

After a while, you start to not care about the story points, even though the film keeps dutifully hitting them. It all gets particularly tedious during Belfort’s fall. This is in part because his rise is already so unappealing – accompanied by so much depravity and horror – that there’s little place for the fall to go. This is where the Goodfellas comparison is somewhat apt, and unfavorable. That earlier film actually gives us a sense of the intoxicating power of gangsterism, and we can see how someone could be seduced by it. Here, we’re disgusted from the get-go. (That opening scene with the little people is funny and striking, but it gives up the game right at the outset.) So by the time we get the usual last-act shenanigans with the wires and the lawyers and the plea deals and whatnot, it’s all anticlimax. Scorsese has already shown us the fall. Hell, he pretty much started off with it. The actual fall becomes redundant.

But the film’s final scene is quite haunting, and brings everything back into focus, even as it leaves on an irresistibly open-ended note. Now, Belfort has become a motivational speaker. (And is that the real Jordan Belfort introducing DiCaprio in his scene?) This time, as before, he asks members in the audience to sell him the pen. As various people try (and fail) to make that basic transaction, the camera moves towards a group of wide-eyed audience members, sitting there waiting for their shot. And then, it cuts to black on their eager, expectant faces. It’s a profoundly sad moment. Belfort at this point isn’t even selling stocks, or money, or even that pen. At this point, we don’t really know what he’s selling. He has endless supplies of bullshit, waiting for it to become demand. And that demand could be for anything – money, women, tuition for your kid, healthcare, love, respect, dignity. His bullshit will fill our emptiness, whatever it is.