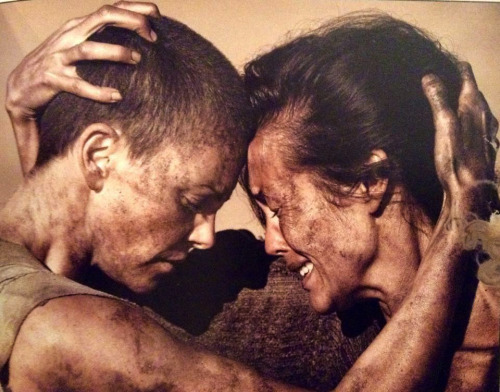 We also realize that, as a captive young girl, Furiosa probably never properly got to mourn her mother. She probably couldn’t – or maybe she chose not to. At any rate, it’s clear that she put this part of herself away for a long, long time; she may not have even realized it was still there. Here, in this quiet gesture, is a world of backstory and development for those who want it. It fires the imagination – but it doesn’t insist on it. Like the best art, it empowers the viewer to drift and dream beyond the borders of the work.

Mad Max: Fury Road has been widely, ecstatically praised, and that certainly makes me happy. But it has also come under some criticism for its relentlessness: Even some who admire it admit that, as a non-stop chase movie, it’s a little too much of one thing and not enough of another. I can understand that criticism, but I can’t share it, precisely because of moments like these, which say so much more to me – and do so far more eloquently – than reams of exposition or dialogue ever could.

True, it’s a brief scene right before the chase starts back up again, but its very brevity is the point. Furiosa hasn’t had a chance to slow down and reflect – nor have we. That it’s so adrift amid the madness gives the moment added depth: If we were to then go on and hear more about Furiosa's past, or her mother, or whatever, it would lose its significance amid something more conventional. (To be fair, the larger scene itself does go on, to reveal that "the green place" Furiosa has been dreaming about is no more, resulting in her breakdown. But this little gesture of recognition and belonging is critical to understanding why Furiosa breaks down; otherwise, it would be a mere grace note.)

Here, I’ll go one step further. Fury Road is, yes, a fantastic piece of action filmmaking – breathless, beautiful, and bold – but it’s also something else. Through its sheer, spectacular drive, it puts me in the same kind of reverie that slow cinema does. One of the great pleasures of watching the static long-take aesthetic – in a film like, say, Tsai Ming-Liang’s What Time Is It There? or Nuri Bilge Ceylan’s Distant – is the way it focuses our attention on small details that gain monumental importance: a pair of wet socks on a radiator, or an otherwise irrelevant small fish swimming around in an aquarium. I would argue that for all the sublime beauty of the non-stop action in Fury Road, it possesses a similar kind of refinement.

In movies like these, the absence of conventional dramatic development makes us lock in on the smallest of gestures and incidents – not out of poverty, mind you, but because great filmmakers teach us to see all over again. Their work transforms us, changes our inner rhythms and points us in all sorts of directions we may never have noticed. And yes, a film by George Miller at his best does that same thing. Even if, instead of long takes of people staring off into space, he’s giving us fast cuts of trucks and motorcycles flying through the air.

(If you want to read more from me on Mad Max: Fury Road, you can read my review of the film for the Nashville Scene here, and this longer essay on the films of George Miller, for Vulture, here.)