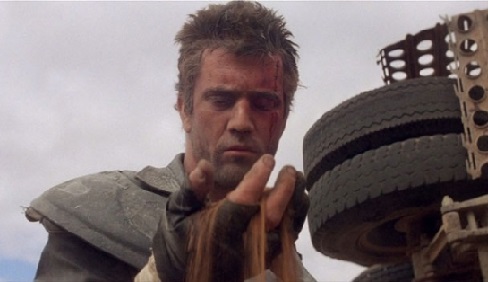 Although the series would define what so many viewers now think of as “post-apocalyptic,” the first Mad Max was not really a sci-fi film at all. Rather, it was a low-budget gearhead thriller about a loose-cannon Aussie cop who takes on some violent motorcycle gangs. Its director, George Miller, a doctor, had been inspired to make it after spending a little too much time around the emergency room – hence all the random cutaways to eyeballs and the film’s almost clinical fascination with realistic violence.

It was with this second film, known to most of the world simply as Mad Max 2, that director Miller and star Mel Gibson took Max (who lost his wife and child in the earlier film’s shattering finale) and projected him into a post-WWIII future. Now, society had fully crumbled and small, ragged bands of ruthless warriors fought desperately for oil across a bleak desertscape. It was an epic gesture, to be sure, but it wasn’t a particularly grandiose one. I don’t know what kind of budget he was actually working with, but Miller craftily used the natural terrain of Australia to create his science-fiction wasteland. In effect, he did with The Road Warrior what Jean-Luc Godard did with Alphaville, creating a faux-futuristic prism through which to see the present. 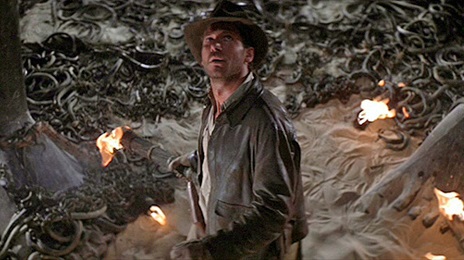 Yes, it’s still good. Steven Spielberg’s 1981 masterpiece hasn’t dated one bit, in part because it was already something of a throwback – a blend of cutting-edge effects and technique with a defiantly old-fashioned sensibility. Spielberg took the template of the action serial – those corny, disposable, cliff-hangery pieces of escapist pulp from the ‘30s and ‘40s – and crafted something whose speed, narrative shorthand, and element of surprise were very much of the moment. Its hero, wisecracking archeologist adventurer Indiana Jones (Harrison Ford) was a combination of Buster Crabbe, Clark Gable, and, well, Harrison Ford himself, whose cynical cool had just made Han Solo one of the most iconic heroes in movie history. In a sense, this is what Spielberg has always done. (Heck, he did something similar in Lincoln – mixing a post-Nixonian study of the infernal American political machine with an earnest, Capraesque belief that men of good will can still accomplish great things.)

So I took an unintended break from this blog for the past few months. Not because I didn’t have anything to write about, but because I had too much to write about, most of it for other places. One of the big things I worked on over this time was a list for Vulture of the 25 Best Action Movies Since Die Hard, a piece that got a lot of people reading and thinking and calling me names, as intended. One of the best things about writing it was revisiting the great action films of the 1990s – kind of a banner decade, what with films like Speed, The Rock, Point Break, Hard-Boiled, Terminator 2, etc. But one of my regrets about the list was that, because we pegged it to Die Hard, I had to ignore a lot of the great action films of the 1980s – an altogether more complicated and darker lot, I think, than most of the ones that came later.

So, I’ve decided to dedicate the first week of my return to the blog to ‘80s Action. For the next five days, each day I will highlight one great, seminal action film from this decade. Here’s the first one.