So I took an unintended break from this blog for the past few months. Not because I didn’t have anything to write about, but because I had too much to write about, most of it for other places. One of the big things I worked on over this time was a list for Vulture of the 25 Best Action Movies Since Die Hard, a piece that got a lot of people reading and thinking and calling me names, as intended. One of the best things about writing it was revisiting the great action films of the 1990s – kind of a banner decade, what with films like Speed, The Rock, Point Break, Hard-Boiled, Terminator 2, etc. But one of my regrets about the list was that, because we pegged it to Die Hard, I had to ignore a lot of the great action films of the 1980s – an altogether more complicated and darker lot, I think, than most of the ones that came later.

So, I’ve decided to dedicate the first week of my return to the blog to ‘80s Action. For the next five days, each day I will highlight one great, seminal action film from this decade. Here’s the first one. 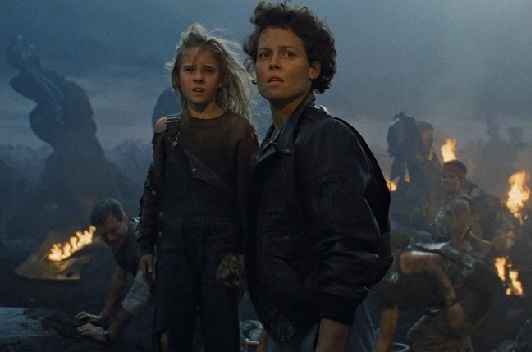 On the page, it sounds almost like a giant “screw you” to everything that made Ridley Scott’s 1979 haunted-house-movie-in-space so great: While the earlier film gradually revealed its central monster inch-by-inch over the course of its running time, James Cameron’s sequel would feature hundreds – nay, thousands -- of monsters, constantly charging the characters and the camera. While the earlier film unfolded deliberately, slowly ratcheting up the tension via its silences and its helpless characters’ growing fear, the sequel would be an action movie full of big guns and hot-dogging space marines. While the earlier film had a slyly subversive proletarian undercurrent – its characters were sci-fi variations on blue-collar types, ordinary guys who landed on the wrong planet at the wrong time and got screwed over by the powers-that-be – the sequel would be an all-American blow-away-athon. Directed by the guy who wrote Rambo: First Blood Part II, no less.

But Aliens, go figure, contains multitudes. It actually does many of the same things the original Alien did. It ratchets up the tension gradually and even works in a slow reveal of its own; “Who’s laying the eggs?” Sigourney Weaver’s Ripley asks early on, and we know that we’re going to find out at the end. It presents another case study in growing helplessness – those big guns our heroes wield turn out to be quite problematic, and ultimately rather futile. And – horrors! -- it even manages to sneak in a bit of anti-corporate subversion: The hot-dogging space marines, it turns out, aren’t all that different from the grizzled laborers in the earlier film. For all the soldiers’ bluster, they too are basically just working stiffs who got dicked over by upper management.

And, amid all that, it’s a beautifully made film: Cameron understands the power of the unknown, and he’s able to use darkness and shadow in much the same way Scott did, while also choreographing elaborate action scenes in a way that utilizes chaos without ever sacrificing clarity. (If you’re ever confused at any point in a James Cameron action scene, that’s because the characters are confused, and he wants you to be, too.) But he’s also a poet of hugeness: You watch Aliens with a sense of awe at how well the director has re-imagined and expanded a world you only saw bits and pieces of in the first film, and somehow done so without sacrificing any of its mystery or terror. It feels like a magic trick.

That brings me, however, to Aliens’ somewhat more complicated legacy in action cinema. It upped the ante so effectively that the “more heroes, more villains, more monsters, more everything” ethos became pretty much de rigeur for action sequels, a trend that has led to a lot of garbage. But that’s because those films I think ignored what was Aliens’ real achievement: Its ability to raise not just the size of its action and effects, but the scale of its storytelling.

Consider how, amid all the insanity, there are these beautiful little character trajectories: The way the tough Latina Vasquez’s (Jenette Goldstein) distrust and rage towards her rookie lieutenant Gorman (William Hope) becomes one of affection and solidarity in their final scene; the way the boastful, musclebound Hudson (Bill Paxton, in a scene-stealing role) quickly collapses into a whimpering puddle of shrieking terror at the first sign of the aliens, only to eventually reclaim his bravery and honor; and, of course, the way that Ripley, who in the film’s opening scenes weeps over her thwarted motherhood, becomes a surrogate mother to the young survivor Newt (Carrie Henn), only to have her maternal instincts reflected back by the film’s central demon in the climactic face-off. It is for these reasons that Aliens is more than just a kick-ass action flick. It’s a sad, profound, exhilarating, and terrifying one, and you’ll never ever forget it.