Why I Love "Indulgent" Films 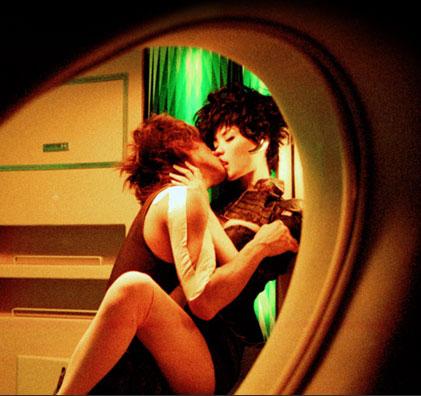 I’m not one of those writers who likes to fuss over his phrasing, and I’m definitely not one of those writers who likes to come up with what he’s going to say ahead of time (in fact, I’m more the opposite – the kind of writer who comes up with something interesting to say long after he’s already filed his review), but years ago I came up with an expression I really hoped I could one day use in a review. It was inspired by some of the initial reviews coming out of Cannes about Wong Kar-Wai’s 2046. They all seemed to suggest that the film was: 1.) gorgeous and 2.) impenetrably indulgent. I hadn’t seen it, obviously, but for some reason these words flashed across my brain:

“An exquisitely crafted journey into the director’s own asshole.”

Now, I should add here that I actually like Wong Kar Wai’s films a lot. But for some reason everything I was hearing about 2046 made me think it was going to be an insufferable wankfest. So I waited, savoring my quote, not revealing it to anybody, until I could finally see the film and unleash my verbal brilliance on the world.

And…surprise! I loved 2046. It was exquisitely crafted, yes. But a journey into the director’s own asshole it was not. In fact, it had a lot to say about the way memory works, which is why its structure must have seemed so elusive. (Also, it had been subjected to some judicious trims by the time I got to see it.)

So, I kept my quote in its holster, figuring that I’d eventually come upon the right movie on which to aim it.

But that movie never came. True, some difficult, personal, potentially indulgent movies did come: The New World, Synecdoche, New York, and Enter the Void come to mind, for example... But I loved those, too. They are all on my list of the best films of the last decade. (Though, come to think of it, “an exquisitely crafted journey into the director’s own asshole” sounds like it could be the plot of an actual Gaspar Noe film.)

It soon became clear to me that I actually like this sort of thing. I mean, if you’re going to make something ambitious, personal, and difficult, and you manage to make it beautiful and exquisite – well, as far as I’m concerned, you’re basically good to go.

Are there directors who make personal, impenetrable films that drive me crazy? Absolutely. I still don’t know, for example, why the Polish Brothers have a career. At the same time, though, I’d argue that their films are anything but exquisite – that’s kind of the problem. We’re not just talking about nice photography and music, which their films often have. We’re talking about something ineffable that directors like Wong and Malick are able to bring to their best work. (Though not always: Wong’s film after 2046, My Blueberry Nights, was an absolute trainwreck. If only it had been indulgent, instead of just plain incompetent.)

I wouldn’t presume to know what to call that something ineffable, but something does strike out at me about these films, and I’ve said it before: A film you need to see again should be a film you want to see again. It should create a world that draws you in -- that, for all it leaves unsaid, feels like a defined realm. Watching the movie should feel like you’re traveling to that place, wandering around in it, discovering new things in it, getting lost in it... This I think is the key to connecting with an audience when tackling something this difficult.

That’s not to say this will make these films popular: Nobody would accuse Terrence Malick of making box office juggernauts, and I’ve certainly suffered through any number of screenings of The Thin Red Line and The New World where the audience was cat-calling the screen. Still, those of us who love his films and watch them over and over again don’t even really think of them as films. They’re places we visit, and it has to do with more than just “atmosphere.” To paraphrase The Sheltering Sky (another self-indulgent masterpiece!): Atmosphere is tourism. I’m talking about travel.

Tarkovsky, of course, was the king of this genre – Stalker isn’t just a movie, it’s a place, as are Nostalghia and Andrei Rublev. They bewilder you, but they also draw you in and make you want to explore their mysteries. Indeed, I'd argue that’s the only way they can work. (Conversely, I'd argue that Soderbergh's Solaris remake, despite the best of intentions, was so stylistically understated that it failed to create a world its viewers could inhabit.)

It occurs to me that Anti-Christ, for all its flaws, is a place, too, and maybe that’s one reason why it continues to stick with me, despite my not caring too much for it initially. I may have to (gasp) revisit that place one of these days.
Posted by Bilge Ebiri at 10:00 AM