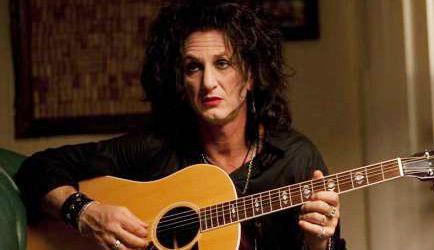 This alarming image comes from Paolo Sorrentino’s upcoming This Must Be the Place, starring Sean Penn, Frances McDormand, and (um) Judd Hirsch. One of a number of films screening at this year’s Cannes Film Festival, it sounds utterly insane: Penn basically appears to be playing an aging rock star-cum-potential Nazi hunter. Advance word suggests though that the film is closer in feel to the director’s breakthrough film The Consequences of Love -- which is a masterpiece, but a very understated, mournful one.

Perhaps needless to say, I am full of anticipation…and fear. If anybody currently working can pull off this kind of tonal balancing act, it’s Sorrentino. You can read a borderline-embarrassing gush for Vulture penned by yours truly a couple of years ago over here.

But we’ve all witnessed that tragic phenomenon of the super-talented international auteur whose career crashes on the rocks of an ambitious English-language film, often their first. Lukas Moodysson with Mammoth, Tomas Vinterberg with It’s All About Love, Ingmar Bergman with The Serpent’s Egg (and to a lesser extent with his earlier film The Touch), Emir Kusturica with Arizona Dream (a work that I personally love), and so on and so forth.

Sorrentino’s English isn’t very good, so I’m concerned. But he’s also a fucking amazing filmmaker, so I’m hopeful. Plus, duh, it’s possible for a film to be savaged by critics and still be awesome. (Like I said, I love the aforementioned Arizona Dream.) I won’t be at Cannes, so I’ll have to find a way to spend the next few months ignoring these critics, most of whom are probably predetermined to hate it.

That said, who the hell releases a still like that??
Posted by Bilge Ebiri at 3:00 PM

Email ThisBlogThis!Share to TwitterShare to FacebookShare to Pinterest
Labels: cannes, paolo sorrentino, sean penn, this must be the place