The Woman in the Fifth: Literary Uncertainty 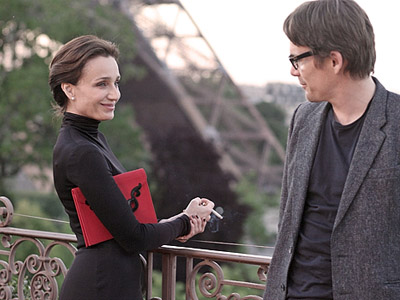 Pawel Pawlikowski’s The Woman in the Fifth is the kind of movie whose flaws might actually be an offshoot of its director’s talent. Pawlikowski tends to make touching mood pieces about loss and regret, but this film sets itself up as something of a thriller. Ethan Hawke plays Tom Ricks, a writer who is visiting Paris to be with his family. But he’s very quickly turned away by his wife, who does not want him anywhere near her or their daughter. (“Can we just talk like normal people?” he asks his wife. “You’re not normal,” she says and calls the cops.) There are some indications that he’s been in a hospital, or a prison. Robbed of his suitcase and money, Tom finagles himself into a room in a seedy bar-hotel. In exchange, he takes a somewhat thankless, no-questions-asked job where he has to sit behind a desk in a nondescript building and let in various shady looking characters who utter a cryptic password.


So, right off the bat, we have a number of mysteries we’ll want solved: Why does Tom’s wife fear him so? Who are these strange men coming to this strange place? To which the movie adds one more: Who is Margit (Kristin Scott-Thomas), the elegant, mysterious Hungarian widow with whom Tom strikes up a rather powerfully intimate relationship? Therein lies (part of) the problem. The Woman in the Fifth is a mystery that seems to reject the mantle. We suspect early on that none of this is going to be properly resolved: Pawlikowski establishes the uncertain, queasy mood of the film quickly, with asymmetric close-ups and elliptical cutting. It’s all quite compelling at first, but soon begins to exasperate.

The movie seems to exist in some kind of liminal space that feels like a literary device. The film was based on Douglas Kennedy’s novel, and this is indeed the kind of atmosphere that probably plays out better on the page than onscreen; the remove of written language can serve as a buffer between our expectations and the drama unfolding in the narrative. This is the realm of writers like Paul Auster and Armistead Maupin – who capture a literary tone that’s pitched perfectly to the urban fables they’re trying to tell. I haven’t read the novel, so I can’t tell if it was written in the first person – but something tells me that whatever its actual point of view, the book is, fundamentally, told through the eyes of this broken protagonist. So too is the movie, and there’s a certain austerity to the film that is at first chilling. But eventually we start wanting to know what the hell is going on, and the mood just becomes cold and inert.

I’m selling the movie a little short. For all that, it’s actually intensely watchable. It’s hard to keep your eyes off Scott-Thomas and Hawke. She’s perfectly lovely, mysterious, a woman who seems to exist in some kind of in-between world; we can’t place her age, her accent, or her intentions, but we keep trying to imagine her into concrete existence. (The first time he visits her house, she gives him a hand-job before he has a chance to sit down; it’s a testament to Scott-Thomas’s acting that she makes the moment seem strangely refreshing and innocent.) And Hawke has compellingly aged over the years into a brittle, desperate figure who feels like the rotten outcome of the literary romantics he used to play when he was young – the jaded yet calculatedly scruffy poet-rocker in Reality Bites, the wide-eyed American traveler (and later writer) of Before Sunrise and Before Sunset, and the submerged prep school student of Dead Poets Society.

And as far as the plot is concerned, The Woman in the Fifth doesn’t leave us entirely hanging. The story does attain a kind of closure, and even resolution, but it does so in a touch-and-go way that leaves us curiously dissatisfied. It’s like if Hitchcock’s Notorious morphed into Tarkovsky’s Solaris, only not nearly as interesting – not nearly as cinematic -- as that. As a film, its pleasures remain incidental.
Posted by Bilge Ebiri at 12:25 PM