This is Not a Prometheus Thinkpiece

I’m enjoying reading all these Prometheus thinkpieces. (Indiewire collected some of the more notable ones here.) In a way, I’m getting more out of those pieces than I did out of Prometheus itself. Not to say I didn't like the film -- I did. But going in I was told to expect a Big Idea movie, that if I went in anticipating an Alien flick I might be let down – the way that had I gone into Blade Runner expecting a kick-ass Harrison Ford sci-fi movie, say, I might have been similarly disappointed 30 years ago. That the last thing I should expect from Prometheus was Alien 5. Except that what Prometheus presented me with was exactly that. And not in a bad way.


Although Fox built a zillion dollar franchise around the Alien films, the series had run out of ideas after the second one. The obstacle: How to put a new spin on the basic It! The Terror from Beyond Space template – spacemen arrive at strange planet and are eaten alive by an unthinkably evil extraterrestrial (or two)? The David Fincher-directed Alien 3 had the same outline, with a couple of minor reversals and a decidedly more expressionistic, Sci-fi/Medieval mood. (It sort of succeeded on that level, because Fincher is if nothing else a master of atmosphere. Where it failed was in providing typical genre thrills, which Fincher's never been particularly good at.) Yes, there was a slight twist to the alien xenomorph in the third film -- having been "born" of a dog, it was faster than earlier iterations -- but that didn’t register as a game-changing development. (The aliens were already pretty fast.) Alien: Resurrection, on the other hand, gave us a lot of belabored technical mumbo-jumbo, an elaborate chase narrative, and some offbeat comic humor – mainly to hide the fact that it had nothing to add as far as the central creatures (or characters) were concerned. And the Alien vs. Predator movies just disposable, albeit occasionally enjoyable, monster movie indulgences.

Prometheus solves the problem pretty easily. As a plot, it’s essentially a hybrid of Alien (spacemen discover mysterious creature) and Aliens (spacemen fight back against a host of mysterious creatures), but by positing itself as a prequel, it’s able to keep the alien creatures themselves uncertain. We know right away that it’s not the typical facehugger-cum-xenomorph of yore, so it keeps us guessing, even as the thing(s) we’re wondering about are picking off our heroes. We know what’s basically going to happen, sure, but because we don’t quite know the exact nature of the beast this time around, there’s a strange, thrilling uncertainty that hangs over the film.

Of course, there’s more to Prometheus than that. Probably. Maybe. 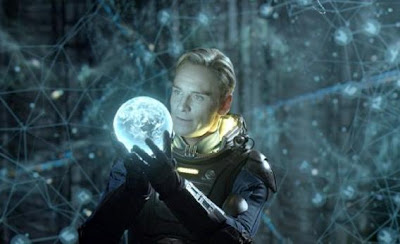 Really, it’s sort of up to us how much to let it expand or contract in our minds. You won’t necessarily miss out if you don’t want to dwell too much on the (kind of dorky) mythology the film is suggesting, another one of those Chariots of the Gods-type deals where a superior race of god-like humanoids basically gave us life on Earth. (And are we really that curious as to why the Engineers wanted to destroy humanity? Destroying us – or teaching us a lesson – because we’re not worthy is what almost all superior science-fiction races want to do, from The Day the Earth Stood Still to 2010 to The Matrix.)

At the same time, you can let your mind run with this film as well, as a lot of fine writers have – in part because Scott keeps everything so vague. As Geoffrey O’Brien, in his excellent piece for the New York Review of Books, puts it:

[Scott] continually suggests more than the movie’s plot and dialogue can live up to, and when he wants he can deliver a boreal blast of the “magnificent desolation” that Buzz Aldrin caught sight of when landing on the Moon…We were never really in the realm of working out logical solutions to difficult problems; what Scott and his writers are up to is throwing as many juicily irrational ingredients into the same cauldron to see what happens when they start to interact…

More so than most other directors, Scott seems to understand not only that a picture can tell a thousand words, but that what’s beautiful about cinema is that it can ask a thousand questions. This is also the philosophy guiding Jim Emerson, who at his Scanners blog delivers an amazingly thorough visual exegesis of the film, in particular teasing out connections to the two “ghost films” that haunt Prometheus: namely, the original Alien and Stanley Kubrick’s 2001: A Space Odyssey. (He also gets into some of the reasons why the Alien films are so disturbing for viewers, especially male ones.)

There’s also my pal Bill Ryan’s lovely piece at his blog, which identifies a series of echoes within the film of creators wanting to destroy their creations. As he puts it:


[N]ot only is existence nothing, but creation itself is at best an indifferent act, and at worst a malicious one. Throughout the film, creating something results in that creation being unwanted, or hated, or hating its creator. Most commonly the creator, which may sometimes be a symbolic role, loathes and wishes to destroy what it has made.

The most astoundingly thorough piece I’ve seen, though, (and thanks to Indiewire for pointing me to it) is probably Adrian Bott’s look at the various mythological and religious references and overtones in the film. He gets into fascinating notions of “the interwoven themes of sacrifice, creation, and preservation of life.” It’s dense and packed with all sorts of eye-opening references. Sort of like reading the footnotes to T.S. Eliot’s The Waste Land. But it’s also clear that, in many ways, Bott saw a different film than I did. Maybe a better film. Certainly a more resonant one.

So, even though the film itself didn’t make me think too much, all these pieces are. And that suggests that, however we may feel about it now, Prometheus will have some serious shelf-life. That maybe like Blade Runner (and, indeed, Alien) it will remain relevant to the discussion decades from now. (Unless, I suppose, Scott and his team follow it up with some Alien Engineer Jesus movie, which would be unfortunate.) 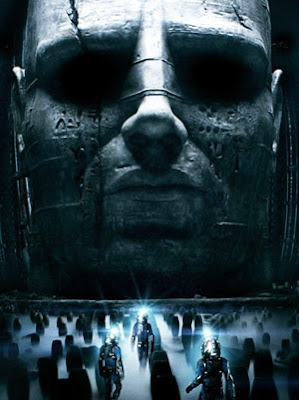 All these pieces also confirm that Ridley Scott is, in some senses, the perfect geek filmmaker. He’s never been a particularly good storyteller. He never seems that interested in following a narrative, on focusing our eyes on the elements essential to the plot and the emotional through-line of his films. (He’s no Spielberg, in other words.) He thinks in images and sounds, in moods and emotional building blocks, which might also be why he thrives when he’s working with the simplest scripts – the ones whose story beats are often anticipated by genre conventions. Scott truly understands the power of design in filmmaking – the way a film’s look can both evoke and evolve, in a way that suggests more than the plot will ever deliver. As O’Brien elaborates:

The elements that dominate in [Prometheus]’s first hour—the displays of technological wonders, the comparative charts of ancient astronomical imagery, the android with his limitless powers of analysis and extrapolation, and the inevitably truncated conversations about religion and Darwinism—are meant to suggest an atmosphere of intellectual voyaging, as if we were here to find the solution to a puzzle. From the halfway point on, we tip rapidly into grand guignol country, with an accelerating number of variations on the human body made monstrous by contact (external or internal) with alien life, the inevitable result of messing around in old tombs. Pseudoscientific speculation and pulp images of corporeal horror just naturally go together, and when set side by side they split the difference between “there must be something beyond all this” and “let me out of here.”

In other words, what Scott can do is take something basic and, through the assertion of his sensibility, give it grandeur and resonance. He can take a pseudo-noir about a guy who hunts for robots in the future and make it a hauntingly hesitant rumination on the self. Or take a standard revenge fantasy set in ancient Rome and turn it into an epic metaphor for the power of celebrity. Or take a space monster movie and make it a projection of all our half-remembered nightmares. This is an important talent for a director. It may well be the most important one.