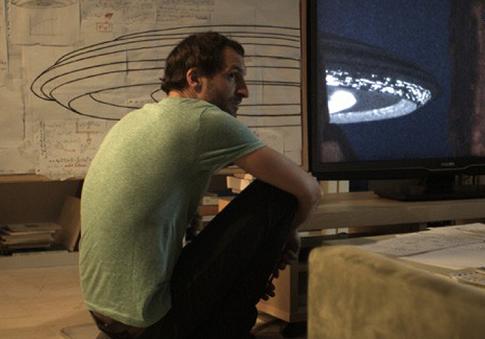 Spanish director Nacho Vigalondo’s Extraterrestrial is itself something of a foreign object from space: An ostensible sci-fi movie about an alien invasion that turns out to be, instead, a romantic comedy. Except that such a description does it no real justice. The sci-fi element is so incidental that even to mention it might set up unmet expectations. Vigalondo seems to specialize in this sort of bait and switch, though, as evidenced by his masterful previous film, Timecrimes. (For a fun chat with him, read my pal Simon Abrams’s interview here.) And Extraterrestrial, while very funny, is ultimately about a subject so deeply serious – the human capacity for love and deceit – that to call it a comedy doesn’t really feel right. It’s somewhere between a bedroom farce and a Biblical epic, with lies as its currency. Do I have your attention yet?

It all starts with a young man, Julio (Julian Villagran), waking up in the apartment of a young woman, Julia (Michelle Jenner), with whom he’s just spent the night. She’s being weird and trying to rush him along, and we soon find out why. She not only has a nosy neighbor who clearly has a crush on her, but she also has a live-in boyfriend. Meanwhile, the TV is full of reports of a possible alien invasion, complete with a giant flying saucer hovering ominously over the city – a situation that at first seems to add some tension and urgency (!) to the situation, but soon enough becomes a kind of strange convenience. When Julia’s boyfriend Carlos (Raul Cimas) shows up and wonders about the dude in his girlfriend’s apartment, they just tell him that Julio had nowhere else to go while humanity was being obliterated or abducted or evacuated or whatever it is that happened to all those missing people.

The lies escalate from there, with the mostly unseen (and continuously mysterious) alien invasion serving as the ultimate excuse around which Julio and Julia, who clearly want to be with each other, build more and more deceit. They are the Adam and Eve of lies; from their deceptions they seem capable of birthing elaborate new realities, and roping others in. Carlos eventually becomes a kind of one man freedom fighter, as a result of all the lies that Julio and Julia have fed him; that situation in return requires more lies to be told, and onward we march.

What’s perhaps most remarkable about Extraterrestrial, though, is how, for all the deceit on display, it finds itself in a surprisingly sweet place. Behind the deceptions, we begin to realize, is something like love. Vigalondo seems to suggest that passion will ultimately overwhelm everything – his film is an assertion of humanity in the face of an unknowable, and possibly phantom, apocalypse. In that sense, maybe it is an alien invasion movie after all, since alien invasion movies in the end all ask the same question: What about the human race is worth saving?