Is This the Moment Modern Action Movies Were Born? 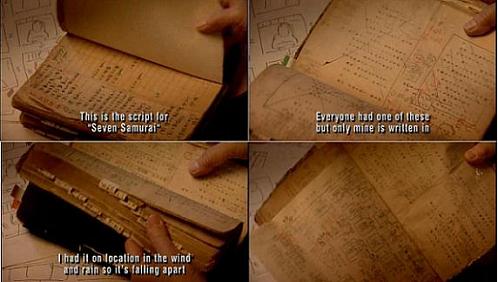 When Criterion’s new Blu-Ray of Akira Kurosawa’s Seven Samurai arrived the other day, shivers went up and down my spine as usual; we all have those films, the ones that have an immediate effect on us at the very mention of their name. In the case of Kurosawa’s film, this has to do with more than just its innate awesomeness (though said awesomeness is, in fact, considerable). Check out the above stills, taken from Adam Low’s 2001 documentary Kurosawa, in which the director’s long-time script supervisor and assistant Teruyo Nogami shows us her script for the film, its pages having been battered back in the day by relentless wind and rain and mud, the whole thing now looking like some ancient scroll. In other words, there’s something heroic about the film’s very existence, in the idea of Kurosawa and his cast and crew out there shooting for more than a year, running catastrophically over budget, braving the elements, and coming back with, well, Seven Samurai.
Much has been written about Seven Samurai, and much will continue to be. (Somewhat paradoxically, when I tackled Kurosawa’s oeuvre in two separate pieces earlier this year, I didn’t dwell much on it, despite the fact that it’s my favorite and probably his best-known film.) It’s hard to overstate the film’s importance, but it’s also the case that words don’t quite do it justice. The thing I keep coming back to is this scene right here, occurring less than half an hour into its 206-minute running time. It’s far from the most important or poignant or powerful or exciting scene in the film, but I’ve always found it hard to shake. Here’s the setup: A bandit has taken a young child hostage in a small shack. The film’s head bad-ass Kambei (Takashi Shimura), comes to help. And, well, you’ll see what happens.

What will immediately jump out is the slow motion. Kurosawa obviously wasn’t the first filmmaker to use it, and he wasn’t even really the first to use it in an action scene. (Clouzot had dabbled in it in The Wages of Fear a year earlier, and, hey, if the pillow-fight in Zero for Conduct counts as an action scene we can trace the phenomenon at least back to Vigo.) But there’s something else at work here. The violence is aestheticized in a way I don’t think the world had seen before. It’s the moment when, cinematically, everything changes. (It may have also set another precedent: Roger Ebert wonders if “this scene create[d] the long action-movie tradition of opening sequences in which the hero wades into a dangerous situation unrelated to the later plot.”) Two years after Seven Samurai’s US premiere in 1956, Arthur Penn would also utilize slow motion in an action sequence, in The Left-Handed Gun; Penn would, of course, really go to town with it in the climax of Bonnie and Clyde. On his heels, Sam Peckinpah, who also revered Kurosawa, would turn slow motion into his stylistic signature. (It did take Peckinpah some time to get it right, though; he reportedly experimented with slow motion while shooting one of the battles in Major Dundee, but even he was apparently unhappy with the results.)
It’s of course not just this scene that makes the movie such a watershed. Seven Samurai was also the first time Kurosawa used multiple cameras, and the result was an opening up of the action scenes in a revolutionary way. The violence could be expanded, stretched, toyed with – it became less a narrative element (though it was certainly that, too) and more something that could enthrall you on its own. You could also make a case that the film has something in common with later video games, in the way that the Samurai have to keep a running tally of how many bad guys they’ve killed, crossing them off what is essentially a score-sheet as the film progresses.
But back to that first slow-motion scene with the bandit: There’s a great little story (possibly apocryphal) about how it first came about. My friend Bruce Bennett got a chance to interview the great Ms. Nogami a few years ago when she came to New York for a retrospective honoring the actor Tatsuya Nakadai. You can read Bruce’s interview with her here. This part isn’t in the article, but at one point, Bruce asked her about this scene in question. Here’s what she said, in his words:

"She told me that the actor playing the bandit in that scene in Seven Samurai was only available for a day, was a famous guy in the Tokyo stage, and Kurosawa was so fond of him that he wanted to be sure that he got a lot of screen time. I kind of called bullshit on her, as much as you can with an 80-something Japanese woman who is blowing your mind, and she smiled a lot more than she had when talking about other stuff, so maybe take it with a grain of salt. In my incredulity I asked if Mr. Kurosawa has cited step printing slow motion examples (Hitchcock's Young and Innocent rang no bells for her, not that it should have - I was just about hallucinating from geekery by this point) but she brushed that off. When I started talking about how influential the Seven Samurai sequence was, she became pretty animated, nodding her head familiarly when I said "Peckinpah" and actually saying the Japanese title for The Wild Bunch which the translator repeated literally (something like "Crazy Gang") before I figured out what she meant. Apparently she met Peckinpah a few years before he died. It sounded like he had corresponded with Kurosawa at one point."

He says to take it with a grain of salt. I say print the legend.
Posted by Bilge Ebiri at 9:00 AM