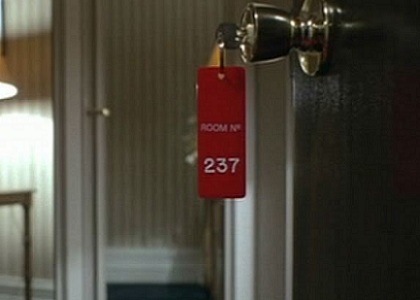 Rodney Ascher’s Room 237 might be the best film I’ve seen at Sundance this year. It’s certainly the film to which I had the most personal response.  My Kubrick obsession is fairly well-documented, and in my early 20s the thoughts swirling in my head weren’t unlike the ones expressed in the film. I wasn't much of a conspiracy theorist, to be fair, but I spent a lot of time – a lot of time, too much time, time that probably should have been better spent having a life – arguing about this sort of stuff.

So it was perhaps a given that I’d respond to a film about all the various theories (some of them quite crackpot) that Kubrick fans have formulated over the years about The Shining. The ideas themselves are all over the place: There’s the relatively well-known (and mostly accepted) one that The Shining is on some level about the genocide of the Indians. There’s the somewhat less familiar one that it’s about the Holocaust. There’s also the rather insane one that the film is Kubrick’s own confession about allegedly faking the Moon Landing.

The film doesn’t seek to judge any of these theories, and there’s no space given to confirming or debunking them. For example, many Kubrick associates are on record that he did indeed do a lot of research into the obliteration of the Indians. He was also reportedly researching (and planning a film on) the Holocaust around this time, and for some years later. But Room 237 isn’t about whether anybody’s right or wrong; it’s about the fact that they’re obsessed. It’s not a film about conspiracy theories; it’s a film about movie love.

To that end, Ascher avoids talking heads and relies instead on audio interviews to narrate scenes from the film -- as well as clips from other films, including some Kubrick ones (most notably Eyes Wide Shut and 2001: A Space Odyssey). He often manipulates the footage– rewinding, slowing down, speeding up. Sometimes he zooms in on one part of a film frame. Occasionally, he’ll manipulate the frame in more dramatic ways: The opening shot is of Tom Cruise in Eyes Wide Shut walking up to a theater display showing The Shining; in the actual film, he’s walking up to Nick Nightingale’s nightclub. (How Ascher and his team will be able to clear all this footage is beyond me, so see this film at a festival if/when you get a chance.)

Thus, Room 237 becomes a maze of references to other movies, so that at times the entirety of film history appears to be engaged in a call-and-response with itself. And that’s what movie love is all about – an engagement with the art where the films all exist in a kind of continuum with each other, where the long shadow of Mephistopheles in Murnau’s Faust can comment on the sight of Jack looming over The Shining’s hedge maze, where the chance appearance of an actor from Jesus Christ Superstar can suddenly push your interpretation of a totally unrelated film into a different realm. The film expresses, better than any movie I can think of right now, the feeling of being lost inside the world of a film, and by extension being lost inside the world of film. There’s a strange kind of power in this, at least for some of us. This stylistic gambit turns out to be Ascher’s most brilliant stroke, raising what could have been a glorified DVD extra into the realm of art. And, incidentally, wiping the floor with me.
Posted by Bilge Ebiri at 1:01 PM