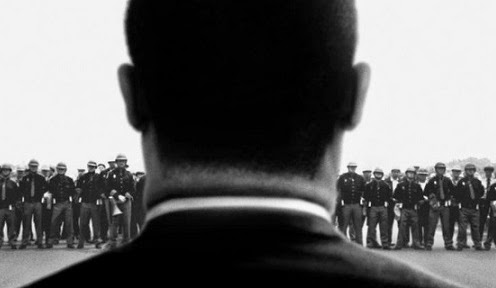 Almost all of the characters in Selma know where history is headed. It’s largely a foregone conclusion throughout the film that some form of voting rights legislation will eventually be passed. But what it will contain, how it will happen, and when – there’s the rub. Waiting things out is not an option, as King makes it clear: If blacks can’t register to vote, he points out, they can’t serve on juries; and if they can’t serve on juries, then people who do things like bomb churches can’t be brought to justice. He also admits that voting rights can’t undo poverty, or crime, or the psychological poison brought on by centuries of oppression; his words are mirrored, ironically enough, by Alabama Governor George Wallace (Tim Roth), who later confesses to Lyndon B. Johnson that he fears voting rights will be just one more step in a march towards blacks getting jobs, political power, and social welfare.

And so, the dialogue -- tense, gripping, beautiful -- keeps reinforcing the notion that voting rights isn’t an end goal, but a critical step in a longer, deeper historical process. So, too, does the imagery. DuVernay is a ground-level director who likes to tell ground-level stories, and at first, she’s less interested in the more epic qualities of these events than she is in the intimacy and immediacy of faces. She often shoots her characters in close-up, at odd angles, using shallow focus; it’s an effective way to convey the sense that no one quite has the full picture, that even though people may understand the broader arc of history, they don’t necessarily know how to get there. Everybody’s flailing, in a sense, trying to figure out the next step.

But the focus on faces doesn’t mean that space is unimportant. We often see Dr. King in church or at home – the two spaces between which he finds himself torn in the film. (The scene where he and his wife tenderly reminisce about how he once talked about getting a small-town church, owning a comfortable home, and living a life of quiet domesticity is heartbreaking.) In his conversations with Lyndon B. Johnson (Tom Wilkinson), we also sense the burden of Johnson’s office. A discussion about whether voting rights should take precedence over other Presidential priorities is framed with a portrait of George Washington at the center top of the frame, as if it were bearing down on both men. Johnson, too, is looking to figure out the right way to act – to do so in such a way that history doesn’t ridicule him down the line. In Steven Spielberg’s Lincoln, The White House was filmed like a haunted house, filled with the ghosts of slavery, waiting for the light to finally come in. Here, it’s filmed like a prison, ringed on all sides by history. When Johnson discusses the protesters outside the gates or in the lobby, we sense the anxiety of a man under siege. But we never see those protesters, as if to underscore the idea that they’re as much in the abstract as they are flesh and blood. 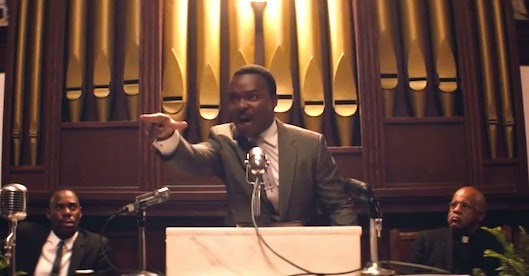 It could be argued that both King and Johnson are two men struggling to inhabit their "offices" -- their greater roles within a broad historical arc. So, Selma culminates in two climactic moments, both of which are filmed with the kind of sweep that DuVernay has studiously avoided for much of the film: The march itself, which intercuts between elegant crane shots and newsreel footage, and Johnson’s “We shall overcome” speech of March 1965, which is given an appropriate level of pomp and circumstance. After all the backroom wheeling and dealing that the film has shown, it’s a refreshingly un-cynical portrait of a political leader assuming the power and nobility of his office.

Some have claimed that the film downplays Johnson’s role in the Selma protests and makes it seem as if he had to be dragged into signing the Voting Rights Act. I’m not a historian, but that seems irrelevant to me in this context. Because here we have a powerful depiction of what the Presidency can mean, even when it’s been compromised. To take an example from recent history: When Barack Obama publicly came out in support of gay marriage in 2012, for one instant, all the rumors and doublespeak and unfortunate, previously-staked positions briefly faded away. Even though it was clear that a ton of political crisis management had finally led to this moment, the moment still had incredible power. Selma, better than just about any recent historical film, portrays the tension between knowledge and action, between vision and work. It dares to unravel a historical process, even as it celebrates it.