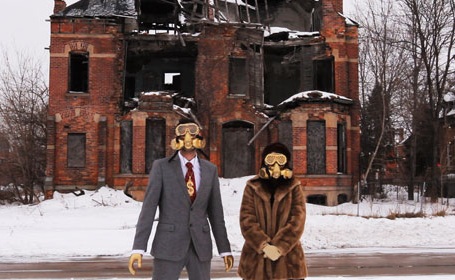 Rachel Grady and Heidi Ewing’s Detropia probably isn’t the definitive documentary about the collapse of Detroit. It doesn’t provide the kind of historical detail and social context that you might need if you wanted to understand the issues behind the Motor City’s economic decline. No, Detropia is as much a ghost story as it is a documentary. It’s an impressionistic journey through the gray soul of a major American metropolis that is slipping – nay, has slipped – into nothingness, lonely but not quite empty.


That’s not to say that Detropia is some kind of experimental tone poem or something. Grady and Ewing give us a number of lively characters – the president of a UAW chapter, for example, or the owner of a local club that’s hit hard times, or a couple of young artists who have moved into a blighted, cheap part of the city – and use them to explore this environment. So we get, for example, scenes from an auto show where one of our protagonists marvels at the relative cheapness of a Chinese electric car versus a Chevy Volt. Or glimpses of a union meeting voting to not even bother to vote on a particularly cruel deal to reduce their pay. But that’s just what these are – glimpses. You could imagine Frederick Wiseman making a four hour epic about that aforementioned union meeting (or even that auto show).

Grady and Ewing aren’t interested so much in direct observation as they are in giving us a kind of emotional truth about what it’s like to be in this place. So, Detropia privileges mood as much as it does context. There are extraordinary images here – an overhead shot of solitary, spectral figures walking along empty streets, or the blasted side of a demolished building waving uncertainly in the breeze, like some drunken beast. The result is a marvel, an achingly beautiful film about a town that once lay at the heart of the empire, and now seems to be drifting off its forgotten edges.
Posted by Bilge Ebiri at 10:00 AM