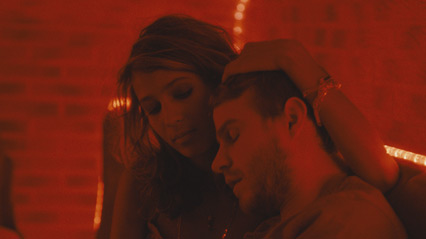 Antonio Campos’s debut feature Afterschool was one of my favorite films of 2008, so I had very high hopes for his follow-up Simon Killer. And while the style is still distinctly his, the new film plays in part like the opposite of the earlier. Whereas Afterschool was heavily structured, with a downright intricate script, Simon seems deliberately disjointed, almost improvised. Whereas Afterschool’s central character was almost catatonically passive, Simon’s protagonist is intensely there, alive and fierce in his tightly-wound little way. And while actors seemed almost like an afterthought in Afterschool (the camera so often wanted to turn away from them), Simon practically hinges on the grand gestures of performance. It may not be as successful as Afterschool, but it feels rawer, more personal – a quality enhanced by its curiously unformed nature.


In that sense, the central attraction in Simon Killer isn’t so much Campos the budding auteur but rather Brady Corbet’s deceptively complex performance as a young American visiting France after a recent break-up with a long-term girlfriend. Simon meets up with a young, beautiful prostitute (Mati Diop) and enters into a physical, surprisingly emotionally open relationship with her. But he’s a bit of a rattlesnake. He tells little lies, then big lies, and soon enough we realize he’s become something of a monster. Corbet thus has to give a performance that hinges on two almost opposite modes of being: He’s both inward – repressed, closed-off, even scheming – and yet also intensely physical. Simon is both broken boy and desperate, driven animal; by the end, you want to think that the former mode is just an act but the character still believes himself, even if we no longer do.

Corbet is something to behold, even if the movie, packed though it is with lovely moments, isn’t entirely successful.  Campos has a very precise style that needs the governing framework of a tight structure (as in Afterschool), and this is where Simon sometimes loses out. The film drifts, perhaps by design but not always to its benefit. Campos’s images have a brittle coolness that makes them feel like pieces of a puzzle; unlike Fassbinder or Denis, they don’t drift well. He’s more in the Kubrick vein, where everything feels deliberate, like it’s pushing towards something greater, like it’s all part of a plan. In Simon Killer, the plan doesn't always feel like it's entirely there.
Posted by Bilge Ebiri at 10:00 AM