A Separation: When Worlds, and Actors, Collide Ashgar Farhadi’s A Separation is already probably the best-reviewed film of 2011, so nobody needs me to sit here and rattle on about how great it is. But there is one aspect of it that I want to get into, a bit.

I’ve discussed elsewhere the problem of different acting temperatures mixing in the same film – most recently in my review of Young Adult, where I felt Charlize Theron was giving a bullet of a performance in a different movie than the rest of the cast, and not in a good way. I’ve chewed off many a friendly ear over the years talking about this phenomenon. American Beauty is a particularly egregious example; every single actor in it seems to be in a completely different film, and it drives me up the wall. Literally -- I once drunkenly scaled a wall to express my hatred of American Beauty.

But A Separation (and Farhadi’s work in general – really, he’s one of the best filmmakers working today, anywhere) represents a good example of when this sort of thing can be done right. That may sound like a strange thing to say, since A Separation is in no way the kind of broad, pointed, vaguely satire-y work that American Beauty and Young Adult are. And yet, you can see right from the beginning that Farhadi and his cast have carefully shaped these characters such that each seems to carry within them a distinct emotional charge, and part of the joy of watching the film is in seeing how these ions collide and play off one another, and how they send the story spinning off in different directions.

Early on, we see Nader (Peyman Maadi) and Simin (Leila Hatami), the married couple whose technical divorce sets the story in motion (she wants to go abroad, he needs to stay in Iran to take care of his dying father), going through their things. “I’m taking this CD,” she says, quietly, holding up a disc. “Take whichever you want,” he says frustratedly, dismissively. “No, just this one,” she says, pleasantly enough, though you can tell she too is dying inside. Immediately, you can tell that these characters are dealing with their current heartbreak in distinct ways: She’s being reasonable, practical – forcing herself to be, of course – and he’s being bitter, totalizing, almost apocalyptic.

We see that, left to his own devices, Nader is kind of an all-or-nothing fellow, and this hard-charging attitude of his in part results in a catastrophe once he hires Razieh (Sareh Bayat), the young, pious, poor woman who begins working for him unbeknownst to her traditionalist husband. As played by Bayat, Razieh is quiet, constantly withholding, and afraid to allow herself to be in anyone’s space – in part because of her religion, but also because, we suspect, that’s just how she is. Her refusal, or rather inability, to let Nader know what’s going on with her – she’s pregnant, and unwell – or to seek any help from anybody else even though she clearly needs it butts up against his mile-a-minute obstinacy in the film’s central event, a misunderstanding with rather dire consequences that in turn send the rest of the story into the byzantine folds of Iran’s judicial system. 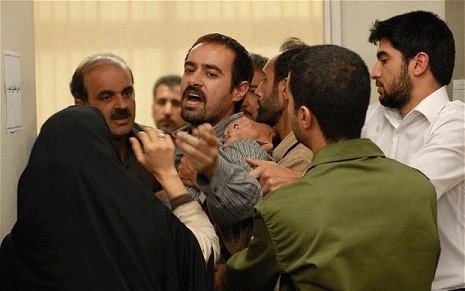 Now into the mix comes Hodjat, Razieh’s husband (Shahab Hosseini), a completely new emotional movement unto himself. He’s impulsive, potentially violent, frustrated, self-loathing -- a strange dynamo of constant eruption and pullback (his classic pose seems to be to put two hands over his forehead and almost slap himself, a strange little mixture of anger and regret that we Middle Eastern men unfortunately do a lot). Once Hodjat enters the story, the chemistry of the whole thing changes. Watch the way he interacts – or, more accurately, combusts -- with Nader, whose bourgeois stubbornness lends him a self-righteousness that Hodjat, for all his anger and resentment and piety, can never have. It’s thrilling – that is, if something that is ultimately so heartbreaking can really be called “thrilling.”

But that’s the thing about A Separation. It’s a relationship drama where you’re constantly worried for everyone’s physical safety. And that I think is partly due to these weird emotional/chemical reactions that Farhadi and his cast set off. Every once in a while, these characters seem to crash against each other, and the film explodes along with them -- gaining urgency, power, danger as it moves relentlessly along, never quite allowing you to see where it might go next.
Posted by Bilge Ebiri at 9:00 AM