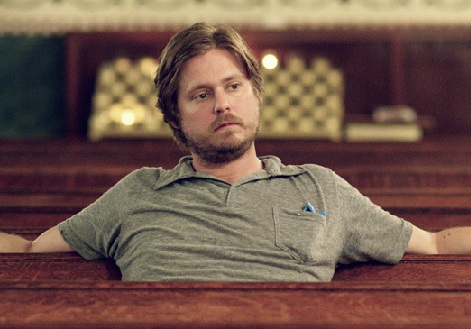 Remember how in Ghostbusters II our heroes had to battle paranormal slime that had been formed out of all the negative energy in New York City oozing down into the sewers? Well, The Comedy is sort of like that slime -- it's the negative runoff of all those Judd Apatow comedies we’ve been watching. If you’ve ever wondered whether stuff like Knocked Up had a certain nasty, cruel, sad subtext – now it's become the text. In fact, maybe those are the comedies the title refers to, since the film itself is not meant to be funny in any way.


Director Rick Alverson appears to have adopted the Apatow house style – many, if not most, of his scenes consist of the film’s protagonist, Swanson (Tim Heidecker, of Tim and Eric fame), tossing ironic, seemingly-improvised riffs and rants at the people around him. It’s all sarcasm, all the time – he seems incapable of expressing a genuine thought. This alienation, however, isn’t just rooted in an artiste’s sense of self-superiority (unlike, say, the character in I Am Not a Hipster, a film with which The Comedy could make a pretty irritating double bill). Swanson is the scion of a wealthy family and currently in line to inherit a lot of money from his dying father. So the posture is really that of a guy who probably doesn’t think he deserves it; he’s smugly self-loathing, and the only way he can express himself is to completely refuse to do anything honest.

All that might have made for a fascinating film, except that The Comedy is brutal and in-your-face and repetitive. Go figure, scene after scene of a character aggressively refusing to engage with the world can get pretty stultifying after a while. There’s some semblance of style here – Alverson does seem to have a pretty good eye – but it’s not enough. There are bits and snippets of backstory, but it’s generic stuff: family dysfunction, loss of innocence, etc.  The Comedy wants to have it both ways – it wants to be corrosive, but then settles for soft, cliché methods of character shading. As such, it’s unable to put us in a truly dark place. With a character held at such a remove, and any attempts to bring us closer to him ringing trite and false, the result is a non-movie.
Posted by Bilge Ebiri at 8:00 AM