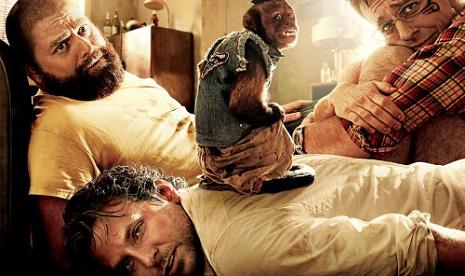 I reviewed The Hangover Part II for the Nashville Scene this week, and I mostly liked it. Mostly. Thing is, I actually loved the first film, even though plenty of fellow film buffs see in it the rough outlines of the Face of Evil or whatever. I’m not sure if Adam Sternbergh is one of those folks, but I certainly don’t get the sense he likes it much, based on his riff for the Times entitles “The Hangover and the Age of the Jokeless Comedy,” in which he argues that Todd Phillips and Judd Apatow have basically created a new genre of comedy in which there are no jokes (a “joke-genocide,” he deems it). He elaborates:

[T]hey have systematically boiled away many of the pleasures previously associated with comedy — first among these, jokes themselves — and replaced them with a different kind of lure: the appeal of spending two hours hanging out with a loose and jocular gang of goofy bros.

I disagree with some of what he says (I’d argue that Apatow and Phillips are kind of diametrical opposites as comedy auteurs), but I do agree with one key part of his main thesis. As much as I loved the first Hangover, I became a bit bothered when, a couple of weeks after seeing it, I was asked to name one good gag from the film and couldn’t really come up with one. It seemed, at the time, like a failing.
But then I revisited the film with my wife, and she said something afterwards that grabbed me: “Oh, it’s a thriller.” And suddenly, it all became clear: I laughed at The Hangover not because the gags were hilarious in and of themselves, but because they were hilarious in the context of the thriller-like narrative structure of the film -- like someone spiked a Christian Metz essay with she-male jokes.
In that light, The Hangover Part II makes a bit more sense. It adheres to the structure and style of the first with an almost Stations-of-the-Cross-style dedication. Ordinarily I might be upset by such unoriginality, but that structure really is at the heart of what makes these movies work. By raising the element of danger, they make you laugh (sometimes nervously) at mostly second-rate gross-out gags. That sounds like a criticism, but in truth, I think it’s kind of a brilliant formula.
Posted by Bilge Ebiri at 9:00 AM