City of Life and Death (But Mostly Death) 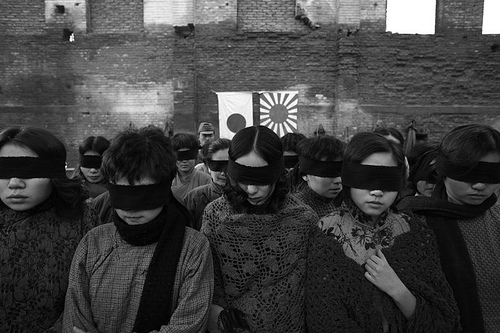 There have been a number of films in recent years tackling the Rape of Nanking (apparently even Zhang Yimou and Christian Bale are getting in on the action), and it’s been hard to review them, as the enormity of the crime they depict is breathtaking -- obliterating any attempt at critical evaluation. In some ways, The City of Life and Death takes things even further in that direction. For all its aesthetic flourishes and epic scope, there’s a strange asceticism to Lu Chuan’s drama that feels right: Its refusal to treat us to traditional narrative almost seems to bring us closer to the madness we’re watching onscreen.

True, the multi-character structure of the film – which follows a host of characters on both sides of the Japanese army’s 1937 takeover of the Republic of China’s former capital, and the indiscriminate massacre and rape that followed – may suggest a typically expansive war epic, but it offers so little in the way of character development that many individual scenes feel divorced from others. For the most part, we’re not following any standard narrative progression towards resolution and closure. Lu’s camera will follow someone intently, only to watch the character die before we’ve been given anything more than the barest hint of information about him. War films tend to ennoble virtues like sacrifice and persistence, but The City of Life and Death seems to be mostly a film about failure. Nobody accomplishes anything in this film. (Well, except for the Japanese, I guess.) I don’t think there are even any moral victories to be had here. A couple of characters do manage to live on. One of them, the film informs us at the very end, still lives; but he doesn’t even feel like a real character, more like a narrative touchstone.

In some ways, this denial is the source of the film’s power. I suppose we could compare City to Schindler’s List – it seems to invite that comparison, thanks to the graceful austerity of its black and white camerawork – but Spielberg’s film focused largely on a story of hope that crystallized the greater evil that surrounded it. (As Stanley Kubrick once reportedly said: "It's about success.") Lu’s film can’t quite bring itself to draw the contrast. His film isn’t a story within the Rape of Nanking; his film is the Rape of Nanking. We keep wanting to know more about these characters, and we keep being denied as they disappear into the black hole of this unthinkable genocide.

The film has not been universally acclaimed; some folks find it kind of generic and manipulative. I’m not sure we saw the same film, frankly speaking. We (okay, I) tend to overuse the word “devastating” when discussing material that tackles tragedies like this. But this is one of the few films I’ve seen that manages to convey a sense of the genuine waste of war. And there’s a real corrosive quality to it all – after a certain point, we’re just waiting for characters to die in awful, hauntingly offhanded ways. And we feel sick to our stomachs at knowing and anticipating it.
Posted by Bilge Ebiri at 1:00 PM