And In This Corner, A Heap Of Broken Images... 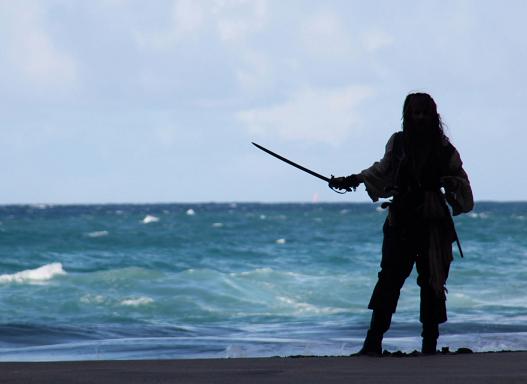 I haven’t seen the new Pirates of the Caribbean film, but my friend Ali Arikan’s review/refusal-to-review of it, colorfully entitled “A Fountain of Maggots,” is more than just one of the funniest pieces of film writing I’ve read this year, it’s actually a genuinely touching cri de coeur that rebels against a very specific kind of modern-day event movie. Here’s a sample quote:


One of the worst films of all time, On Stranger Tides has absolutely and utterly no redeeming qualities whatsoever. I wanted to say it's like watching an enema, but even that's a good thing: you get rid of the filth…It's as if you were cloned, and the clones shared the same consciousness, and then were turned into the human centipede, but instead of three, this centipede is endless. It's not so much pain, though there's that, too, but, instead, nausea.


There is, of course, no end to critics complaining about having to see crap summer blockbusters, but that’s not Ali’s chief concern, I don’t think. He (like me) really enjoyed the first Pirates movie. Even the second one, for all its humdrum spectacle and dull, interminable plot, had a couple of fun setpieces. I still have good feelings about this franchise, mostly. In fact, despite this review, I might still see this movie. And that’s the problem. Because, really, the only reason I hold such feelings is because the first one, that distant, now-unknowable beast known as Pirates of the Caribbean: Curse of the Black Pearl, seemed so fun and exciting and fresh so long ago.

But nowadays, repeatedly, something that is special is then franchised in such a cynical way that all a sequel has to do is tick off a couple of the right boxes and it’s on its way to making a mint. And Ali is not speaking for critics, he’s speaking for average moviegoers, the ones who get sucked into seeing an event franchise entry like this, because they enjoyed the first film, and enjoyed some of what they saw along the way, and are still mildly curious about what might happen. It’s a known quantity in name only -- again, the first film established its supposed known-ness, helping mask the lousiness of the ensuing films.

What’s so wrong about that, you might ask? Think of it this way: What if this were the same movie, but was not a sequel to a popular franchise? (I’m even willing to let it still be based on a Disney theme park ride.) Would anyone really bother to show up for it? It’s like a restaurant serving you a delicious burger on your first visit and then giving you day-old McDonald’s on your subsequent visits. You keep hoping that one day you’ll get that exquisite burger again, but that ship has long sailed; the restaurant feels no need to provide any such thing anymore. It’s not like they’re in the kitchen trying to crack the code of that original burger, wondering what they’re doing wrong. They couldn’t care less. They’re just grabbing as much as they can before you bail.

To be honest, I hate food metaphors when talking about films, but that’s kind of the issue here as well. If you’ve been reduced to relying on food metaphors, then chances are that something has gone from being art to being product. (And yes, I actually do think the first Pirates of the Caribbean movie was art.) Actually, Ali puts it much better than I can, here:


If we cannot take solace from an art form, what can we take solace from? As I tweeted that I was on my way to see the film, a friend replied to say he considered Jerry Bruckheimer a marketing genius. This is it, though, isn't it? Marketing. Products. Consumption. Joy of fucking joys. We had dreams once, we fought for liberté, égalité, fraternité. While doing that, we were supposed to be given hope and power by the arts. Now the arts have become our enemy.

Email ThisBlogThis!Share to TwitterShare to FacebookShare to Pinterest
Labels: ali arikan, pirates of the caribbean