Anticipation of the Light 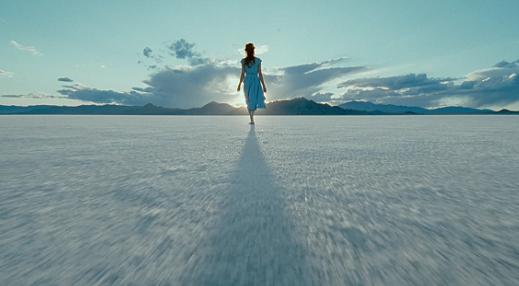 So, I’ve got a piece in this week’s New York Magazine about Terrence Malick and The Tree of Life’s thirty-plus year journey to the screen. The article in its final iteration turned out a bit different than what I set out to write, for a variety of reasons, but it was still interesting talking to some of the folks from the old Q crew. I have yet to see the film, but it just premiered at Cannes, it screens for some U.S. critics today, and  everybody and his mother is either talking about it or getting ready to talk about it. Many of us are still pinching ourselves, unable to believe that its release is almost upon us.
Initially, one of the things I wanted to discuss in my NY Mag piece was how Malick’s style changed over the years. Those of us who adore his work have obviously talked endlessly about the similarities between Badlands, Days of Heaven, The Thin Red Line, and The New World. But we often don’t do enough to acknowledge the very tangible and specific differences between the films, particularly those before The Hiatus and those after – as if to acknowledge such differences would be to concede ground to those who don’t find the later films to be all that. Obviously, we can all agree that the later films are more ambitious and expansive, but it seems to me the differences go deeper.

These were the things I found myself thinking about while trying to trace how Q (the general name for the project Malick worked on with a small crew for a couple of years after Days of Heaven) became The Tree of Life. Could something be said to be “missing” from the earlier works? (“Missing” should be in double-triple-quadruple quotes, of course, since, in talking about Days of Heaven and Badlands, I’m talking about two of my absolute favorite films of all time. Ask my old roommate about the time I watched one or the other of them every week, for a whole year.)
I get the sense that The Tree of Life, with its notion that there are two ways through life (a phrase which is all over the publicity materials, god bless ‘em) is about to answer that question. Indeed, a closer look at Malick’s career reveals that “the way of grace” is precisely what we find in the later films, and what seems absent in the earlier ones. One thinks of the Christ-like serenity of Jim Caviezel’s Witt in The Thin Red Line, the innocent generosity and mercy of Q’Orianka Kilcher’s Pocahontas in The New World. Even the lesser-known, unproduced work has this same quality: Malick’s stage version of Sansho the Bailiff is basically all about trying to show mercy towards others; the Goddess of Mercy even shows up as a character in the draft I read. Similarly, the unproduced script of The English-Speaker is all about the near-impossibility of living a good, graceful life, and, ultimately, self-sacrifice. On the other hand, the characters of Badlands and Days of Heaven were very much preoccupied with the things of this world, and their director basically left them to their own devices. Now, he's given his later characters guides.
This supposed didacticism is of course one of the things that drives the critics of these later films mad. I don’t ordinarily like that sort of thing, either, but Malick manages to pull it off, because his brand of idealism is manages to be both metaphysical and profoundly simple. If some of his characters seem full of grace, it's not because they're superior to anyone else, it's because they’ve seen and remember something that, at least in Malick's cosmology, the rest of us also once knew -- a world that seems unreal and foreign to ours, one which they often think might have been just a dream. These idealized worlds of mercy, togetherness, grace – they’re not worlds we can get back to once we lose sight of them. In other words, they could be said to merely be our collective innocence, the one that slips away from us not just because of momentous things like war and betrayal, but also by mundane things like vanity and pride.
True, the notion of a better, almost Edenic realm does hover around the action in the first two films as well – I mean, one of them is called Days of Heaven, after all -- but I think it’s fair to say that the presence of that better world has become more tangible in Malick's work over the years. And I have a suspicion that The Tree of Life is about to make that world even more visible, at least for some folks.
Posted by Bilge Ebiri at 8:00 AM