Oh, I Guess I Might as Well Say Something About This... 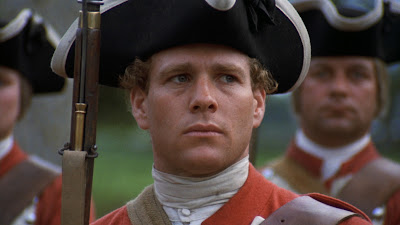 I was starting to feel a little left out of the current mini-debate going on over the upcoming (and, might I add, welcome) Blu-ray release of Barry Lyndon, which has long been my favorite Kubrick film. It's a little complicated to explain, but it mostly concerns the issue of whether Kubrick always intended for the film to be shown in a 1.66 or a 1.78 ratio. Jeff Wells fired the opening salvo. Glenn Kenny of the estimable Some Came Running replied. Then there was some further confusion. And now, it appears that Glenn has settled the matter by talking with Leon Vitali, who played Lord Bullingdon in the film and then went on to become Kubrick's assistant on subsequent films. Vitali said in an interview with Glenn:

Well I can tell you what now, okay; never was it ever 1.66, it wasn’t shot in 1.66, we never released it in 1.66 in any format whether it’s film or television or DVD. It was 1.77.  It was shot it…I mean , the difference between 1.77 and 1.78 is miniscule, you couldn’t see it with a magnifying glass. And anyone who thought it was meant to be in 1.66 is sadly delusioned. Seeing as I was there, at every stage of it; shooting and everything, I should know.

As well he should. And I love Leon Vitali to death (c'mon, he was "Red Cloak"!) but I may have to take exception to his claim that the film wasn't actually shot in 1.66 or ever released on DVD in 1.66, at the very least. Because, as far as I can tell, the old DVD was released in 1.66, and does appear to have more information in the frame than the current 1.78 Blu-ray. To wit:

My Blu-ray hasn't arrived yet, so I took that bottom screenshot from the usually-reliable DVDBeaver website, which is generally quite anal about such things. And that image is 1.78, at least according to my calculator. It's certainly conceivable, probably even likely, that Kubrick intended Barry Lyndon to be projected at 1.78. But the DVD was 1.66, and so was the old laserdisc, which was released while Kubrick was very much alive and in control of such things. Indeed, I had the sneaking suspicion that the old laserdisc seemed to say something about Kubrick's supervision, so I went ahead and asked an eBay seller who currently has a copy of the LD up for sale (I think I got rid of mine years ago), and here's what he told me the backcover says: "Transferred under the supervison of Mr. Kubrick, 'Barry Lyndon' is presented in a matted widescreen format preserving the aspect ratio of its original theatrical presentation." So at some point the 1.66 release was, in fact, acceptable to Mr. Kubrick.

I should also clarify, however, that this is not actually an issue that bugs me too much. Despite my utter obsession with Barry Lyndon (you can read an interesting piece on it I wrote in college over here) I'm totally fine with it being cropped to 1.78. I recently saw the film projected at the historic Loews Jersey Theatre, and I'm pretty sure it was slightly matted. And it was still awe-inspiring...
Posted by Bilge Ebiri at 11:17 PM