Slow and Behold: On Pacing, Patience, and Taste 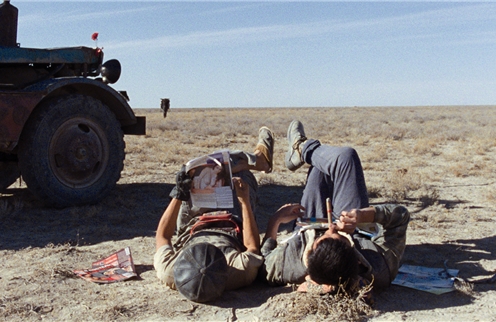 Several days ago, before I got distracted by the Michael Mann film now on the world’s TV screens 24/7, I was at work on a response to this essay by my pal Dan Kois in the New York Times Magazine. Dan’s piece discusses his newfound skepticism over what he calls “aspirational viewing” – watching certain films and TV shows (among others. he singles out Kelly Reichardt’s Meek’s Cutoff, Andrei Tarkovsky’s Solaris, the 2008 Kazakh shepherd film Tulpan, and HBO’s Treme) because of a need to feel like a more sophisticated viewer. “As I get older,” he says, “I find I’m suffering from a kind of culture fatigue and have less interest in eating my cultural vegetables, no matter how good they may be for me.”

It’s kind of funny that on the magazine’s home page, Dan’s piece on Cultural Vegetables appears under a bunch of asparagus recipes. (“Steamed, Stir-Fried, Roasted, Grilled: It’s almost impossible to get fresh asparagus wrong. But here are a dozen ways to get it wonderfully right.”) I’m not particularly keen on comparing movies to food, but Dan went there, so I might as well follow him, and since he mentions his kids in his piece, I might as well mention mine: My two-year-old son loves roasted asparagus. He also loves deep fried eggplant sticks. Along with bacon and yogurt, they’re pretty much the only foods he’s guaranteed to eat.

Now, my two-year-old son may like asparagus and eggplant sticks, but he wouldn’t understand the actual concept of a vegetable if Elmo came and poked him in the eye with it. He’s too young to eat aspirationally. One day, of course, he'll know what eggplant is, and he'll know what vegetables are -- and on that day, there's a good chance he'll stop eating those eggplant sticks, precisely because they're vegetables. But for now, he likes deep-fried eggplant sticks not just because they’re eggplant, but because they’re deep-fried, they’re crunchy, and, let’s face it, they’re delicious. (I love regular old baked eggplant, but I doubt he’d eat that, for example.) In other words: they’re well-made, so they taste good, which in turn makes him feel good on some visceral level.

Similarly, I'd like to think that we don’t watch a 10 hour Polish film because it’s 10 hours and it’s Polish (even though that may have some novelty value), but because it’s incredibly gripping and beautifully made and powerful, because it’s The Decalogue and it was directed by Krzysztof Kieslowski, who knew a thing or two about how to put together a movie. And we watch Tarkovsky's Andrei Roublev over and over again, because it’s gorgeous to look at and listen to and just bask in -- because from moment to moment there is something on the screen imploring you to watch it, drawing you in ever deeper. To dismiss these things as cultural vegetables totally misses the point. As I mentioned in my post on indulgent cinema last week: A film you need to see again should be a film you want to see again.

For example, I happen to love Thomas Pynchon but have never been able to finish anything by William Vollmann, even though they both write ambitious, dense, “arty” novels; that’s because I find Pynchon’s prose to be supernaturally beautiful while Vollmann’s feels both mundane and inscrutable. Categorizing them merely as dense, arty, ambitious novelists may be useful if you’re a bookstore or a recommendation engine, but it’s a weird way to go about being a critic or a viewer, because it threatens to deny them the grace of accomplishment. The work itself should be what matters -- not the rubric into which it fits.

Dan does acknowledge this to some extent, when he notes that he loves Edward Yang's Yi Yi and has seen it five times. But he seems to treat it as an exception, without going into why it works so well for him. Indeed, there’s a strange sort of commodification going on in his piece, but I’m not even sure how to describe it. True, he mentions “slow-moving, meditative dramas” and discusses Solaris, a film almost aggressively deliberate in its pacing and austerity -- but then he talks about Mildred Pierce, a melodrama with the fairly normal pace of an average mini-series. Or Treme, which is in no way slow or meditative and is, in fact, chock full of what we might call “incident.”

Of course, one can’t really argue against Dan’s specific point, since he’s making a very personal one, that these films don’t quite work for him the way they may work for others. And I suspect he’s confessing to a minor form of bad faith -- that he was less excited about actually watching these films than he was about having watched these films. I get that. As a friend of mine once said after watching Prospero’s Books, “I would have enjoyed that a lot more if I was just a floating head and didn’t have a body.”

Dan describes himself as “a viewer whose default mode of interaction with images has consisted, for as long as I can remember, of intense, rapid-fire decoding of text, subtext, metatext and hypertext.” I’m not quite sure what that even means – reading it, all I can think of is Ren & Stimpy – but I suspect that if I started rolling off the titles of films I think of as “intense and rapid-fire,” he’d have specific and different things to say about each of them. Presumably he doesn’t hold Transformers 2 in the same regard as Out of Sight, and wouldn’t necessarily lump The Simpsons in with, I dunno, Children of Men. Or Scream 3 with Pulp Fiction. I could go on.

I suppose though to someone weaned on that sort of stuff, maybe Andrei Roublev and Mildred Pierce do look the same. Which suggests to me that the real “aspiration” here should be not to merely consume things that are different, but to be able to see beyond those differences and separate the ones that work from the ones that don’t. Like the way my son eats those eggplant sticks: Not because they’re eggplant, but because holy shit do they taste good.
Posted by Bilge Ebiri at 4:00 PM