The Magic of Belle Isle: Actors, They're Special 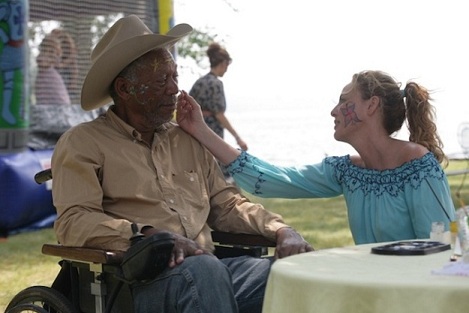 They say that when a director dies, he becomes a photographer. So we could say that when an actor dies, he becomes a monument. Such is the case with Morgan Freeman, an excellent performer whose ability to convey nobility of spirit has resulted in his getting typecast as…well, noble spirits. (How strange it feels now to watch his breakthrough performance as a fast-talking pimp in Jerzy Schatzberg’s 1987 movie Street Smart.) The good news is that some actors can come back from the dead. And while Rob Reiner’s The Magic of Belle Isle doesn’t have Freeman playing a part much different from his usual run of gently-flawed paragons of rectitude, the actor brings more vulnerability to the part than you might expect. The results are effective, even if the film is a cloying mess on so many other levels.


Freeman plays Monte Wildhorn, an embittered, alcoholic, wheelchair-bound writer who agrees to a house and dog-sitting job at a coastal town one summer. His main claim to fame is a series of cowboy novels he wrote years ago; when he arrives, his nephew (Kenan Thompson) has to retrieve Monte’s vintage typewriter from the trash. Next door are three young girls and their about-to-be-divorced mother Charlotte (Virginia Madsen). The middle child, Finnegan (Emma Fuhrmann), becomes curious about the broken old man living next door. Their connection is an obvious one: Her young mind can effortlessly make the imaginative leaps his aging head no longer seems able to. In the meantime, a more adult attraction begins to develop between Monte and Charlotte.

No, there isn’t a single move in Belle Isle’s plot that feels original. There are nosy neighbors, as well as a movie star who wants the rights to Monte’s Western novels. (As you might imagine, the old writer has too much stoic integrity to consent, but he does let the young man down easily.) There’s a retarded kid (Ash Christian, not even trying) whom Monte befriends, deputizing him and ordering him to stop bunny-hopping (no, really). There’s also a scene with a stuck-up big city clown, about which the less said the better. And yet, there Freeman is, making us wonder what’s lurking behind his eyes, which, as gentle as they are, seem to have an added edge of hungriness. The character is meant to be half-empty inside, and as played by this actor, he seems to know it; we sense that beneath the bitterness he’d really like some companionship, to fill the chasm within.

Of course, for all the attraction between Monte and Charlotte, that he is conveniently neutered adds an extra level of soft-focus pusillanimity to the story. But oddly enough, it also underlines the depth of Freeman’s achievement: Listening to Charlotte play her piano next door, he makes the longing palpable, even heartbreaking. Belle Isle is too gentle, too weak a movie to give us anything resembling a real emotional catharsis, but Freeman fills it with genuine life.
Posted by Bilge Ebiri at 12:00 PM