Save the Last "Waltz" for Me: Hitchcock's Much-Dismissed Musical

This is my somewhat belated contribution to the Film Preservation Blogathon, which ends today. It’s all for a good cause, too. Please go here to donate to help the National Film Preservation Foundation’s attempts to run a now-rediscovered fragment of Graham Cutts and Alfred Hitchcock’s long-lost The White Shadow. Alfred Hitchcock had little love for 1934’s Waltzes from Vienna. He called the period immediately after making it “the lowest ebb of my career,” and in later years playfully admonished those who even bothered to see the musical comedy-romance-cum-faux-biopic. Actually, can we even call it a musical? True, it’s a fictionalized tale about Johann Strauss’s efforts to compose “The Blue Danube,” and it’s swirling with music and musicians. But nobody breaks out into song in it, and there isn’t even much dancing. We can’t call it a historical film, either (a la, say, Amadeus), because it’s a fanciful re-imagining of Strauss’s efforts and makes no pretensions towards verisimilitude. It’s one giant tease: A historical musical that can’t manage to fit either genre.

It’s easy to see why a guy as meticulous as Hitchcock didn’t care for it: Quite aside from being one of the least characteristic films in his entire oeuvre, Waltzes from Vienna is also something of a mess, script and story-wise, nothing like the tightly wound Hitchcock narratives (even the non-thrillers) we’ve come to know and love. It’s ostensibly a love triangle between Johann Strauss (Esmond Knight), Rasi the baker’s daughter (Jessie Matthews), and Countess Helga von Stahl (Fay Compton), but there’s also another, half-baked love triangle between Strauss, Rasi, and baker’s assistant Leopold (Hindle Edgar). There’s no real development of love here: Strauss and Rasi are smitten with each other from the very beginning, and the various romantic obstacles and entanglements they face seem there mainly to be knocked down, instantaneously.

There’s also an interesting (and slightly more historically apropos) storyline around the relationship between Johann and his father, Johann Strauss the elder: Dad doesn’t think Junior is up to composing, and Junior wants to prove him wrong. (In real life, the elder Strauss forbade all his sons from entering into the music world, and it was only after he left the family that Johann the younger came into his own as a composer.) But even this father-son rivalry is left relatively underdeveloped. Basically, the whole movie is so airy and light it threatens to blow away. Some will argue that it does.

And yet, there’s more to it than that. The film is perhaps more indicative of Hitchcock’s powers than we might think. (It may be an early Hitchcock film, but he was already a veteran director by this point.) It would be easy, of course, to find accomplishment in its most notable sequence – that of young Strauss becoming inspired to write "The Blue Danube" while watching the rhythmic movements of pastries and dough in a bakery. Playful and beautifully controlled, the scene displays what may well have been Hitchcock’s greatest strength – his ability to organize and choreograph screen movement and space. (You can see the scene in this below segment of the film – it starts around the 5 minute mark.)

The scene, however, is not an outlier. Watch (and listen) closely to Waltzes from Vienna and you’ll realize the entire film pulses with this kind of control. Take the opening sequence: We start in on a shot of a fireman’s horn, then pull out to reveal a rapidly rocking fire carriage, racing towards an alarm. Its way is then blocked by a marching band, which launches into Strauss the elder’s infamous Radetzky March. Then we cut to the café/bakery where the fire is ostensibly taking place – it’s being evacuated, and tables and place settings from inside are being hilariously rearranged right outside. Meanwhile, Ebezeder (Robert Hale), the baker, desperately tries to find an empty table on which to place a giant cake.

The chairs and tables and guests and cakes whirl around with majestic grace, and Hitchcock actually speeds up the movement at times to help maintain the fluidity of the onscreen action. Indeed, each of the three “elements” in this opening sequence (the firemen, the marching band, the café) has its own unique rhythm. Finally, all three come together to create a kind of delirious cacophony. This then gives way -- once Ebezeder is asked where his daughter is and he replies that she is still busy at her music lesson – to the sound of a piano and a couple singing: Johann and Rasi, still inside, practicing, very much in love and oblivious to the madness outside.

The mixing of music and the rhythm of the imagery here is magnificent. In a way, it’s a rawer, more direct example of what Hitchcock does in all his films – manipulating onscreen action, sometimes subtly, so that it races to a beat, a music, all its own. Waltzes from Vienna is full of sequences like this, and it’s a testament to Hitchcock’s abilities that the film seems to sing, even as its characters don’t. It’s not only a surprisingly delightful little movie that’s worth a reassessment, but at times it makes me wonder if, even though Hitchcock never really made a true musical, we could profitably think of all his films as musicals, in a way. 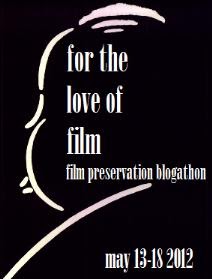