“Blessed Are the Young Who See What Isn’t There”: On the Final Moments of 1900 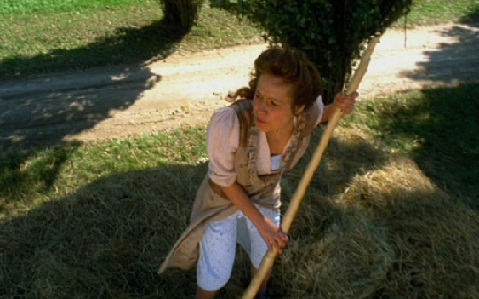 Bernardo Bertolucci’s mesmerizing, towering 1900 is hitting Blu-Ray thanks to Olive Films, and I haven’t been this excited about a release in quite some time. When I saw it again at MoMA last year, I was quite shaken for some days afterwards. There’s something about 1900 that puts every other movie to shame – in its size, scope, and sweep, obviously, but also in the fact that you can’t just shrug your shoulders at it. It provokes an emotionally violent response, regardless of whether you love it or hate it. You might even do both. At 317 minutes, there’s a lot of movie in there.


For its first four-and-a-half hours or so, 1900 is essentially a big, bold melodrama about Italian history, with outsize emotions and a filmmaking style that we might call “operatic,” had the term not been overused. Then, in its last 30-40 minutes, Bertolucci’s film basically (and I think consciously) goes off the rails in its depiction of the events of April 25, 1945, “il giorno della liberazione.” The film’s much-abused peasants, emboldened by the downfall of Fascism, dig up a giant patchwork red flag (one they’ve sewn together and hidden over these many years, and thus a literal symbol of their buried class struggle) and pull out their accordions. Then, they put the padrone, aka the local landowner, aka Alfredo Berlinghieri, aka Robert De Niro, on trial -- not just for his crimes but also the crimes of his forefathers and, essentially, his entire class. They dance around and embrace while Alfredo is humiliated, at one point even beaten down, by peasants who look to their fellow revolutionary, Alfredo’s lifelong friend Olmo Dalco (Gerard Depardieu), who may or may not have come back from the dead, for leadership.

Alfredo and Olmo are the protagonists of the film, twin opposites who in their own ways represent the dueling factions of Bertolucci’s own psyche – the bourgeois sensualist in love with life “before the revolution” and the socialist who seeks a more just world. But it’s Alfredo, the padrone and master, who is the true surrogate for both the audience and the director in the film. True, he’s a feckless, rich landowner, but he’s also the more conflicted character, the one who often tries to navigate some kind of middle ground. The film can imagine Alfredo in all his milquetoast cowardice, bemusement, and fear, in a way that it can’t with Olmo, the angelic and brave Marxist hero. I think Bertolucci understands this, to some extent: When Olmo shows up again here, towards the end of the film, he is first seen by his daughter Anita (Anna Henkel) in the heat of a revolutionary vision, and is thus presented as slightly unreal, a kind of fantasy.

So, when the film’s final act comes and Alfredo is beaten, it seemingly happens with the very approval of the film itself: the humiliation of our main directorial stand-in is presented as an occasion for joy, not fear or sadness or even reflection. This is where 1900 starts to really lose much of its audience; I know that it’s where it lost me when I first saw the film.* But I'm finally realizing that there's a lot more going on here than I once thought.

After a bit more pseudo-Maoist street theater and shots of revolutionaries hugging, something strange happens. Anita and the others grab their patchwork red flag and, screaming, run out of the courtyard, leaving Olmo, Alfredo, and a young boy alone. Suddenly, it’s as if that mass of angry peasants never existed in the first place. Alfredo gets up and says, smugly, “The Padrone is alive.” Olmo resists and tries to wrestle him down. The camera pulls away to reveal, far away, the peasants with the giant red flag still running, disappearing into the horizon like some distant cloud of revolution that has passed. We may now begin to wonder if this whole thing has been a dream of Olmo’s.

And now things get truly bizarre: As Alfredo and Olmo struggle with each other like little kids, Bertolucci cuts to shots of them as old men, still fighting, along the train tracks where a couple of pivotal early scenes from their childhood took place -- a pretty obvious representation of the fact that the class struggle will always continue. Alfredo lies across the tracks, in an echo of a game the two played as kids. We see the train arriving –it’s festooned with red flags, like the workers’ express trains of their youth. The train goes over, and the film’s final shot – a freeze-frame – is actually a flashback: It shows Alfredo as a young boy, lying under the tracks, no longer perpendicular to them but parallel. It’s a scene from earlier in the film, when young Alfredo, who had been too much of a coward to join Olmo in this dangerous game, finally lay down on the tracks to let the train pass over him, proving his bravery at long last.

I’d always accepted this very final moment as Bertolucci’s cute and concise way of ending this unfilmable film, which at this point had gone beyond the level or fantasy to some weird purely symbolic realm (the landowner and the peasant as old men, still fighting, ho ho ho). But now it feels like the key to the film’s entire point of view. Bertolucci’s idealism is, at heart, an unforgiving exorcism of the self. In a sense, 1900, like Alfredo’s belated acceptance of Olmo’s dare, is the bourgeois director's own attempt to prove his socialist manhood. So maybe there’s something wistful about it, about Bertolucci returning to himself as a child and, perhaps settling some long-festering debt, finally laying down on the tracks and letting the engine of revolution pass over him. 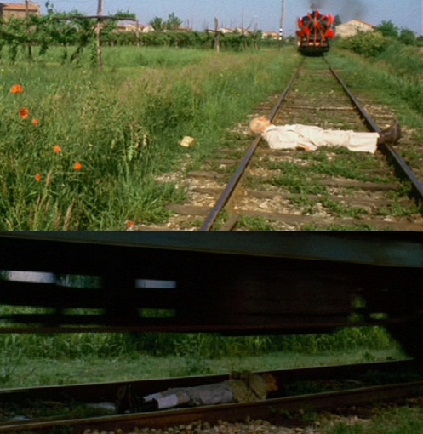 *Bertolucci has said – many times – that the film’s portrait of Liberation Day is meant as a kind of Utopian projection, not an attempt to actually depict what happened (or even what might have happened) in 1945.