How The Thin Blue Line Changed My Life 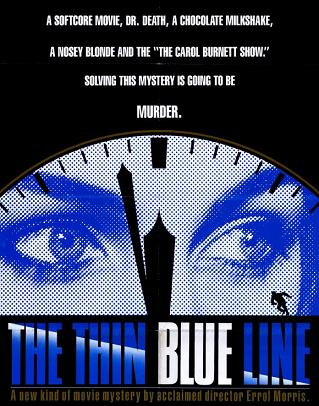 With the recent death of Randall Dale Adams and the release of Errol Morris’s new film Tabloid (which is amazing, btw), I was reminded of the first time I saw The Thin Blue Line, which proved to be a major teachable moment for me.
I was 15 when The Thin Blue Line came out in 1988. It was playing at the Outer Circle theater in Washington, D.C., a small and rather uncomfortable (but still absolutely awesome) two-screen arthouse that not only closed years ago but has since been demolished. The Outer Circle happened to be not too far off my bus and subway route from school, so I was in the habit of going to see movies there before heading home at the end of the day.
So one day I headed to the theater with the intention of seeing something; I'm not sure what the film was (though I have this sneaking suspicion it might have been this). When I got there, it turned out the newspaper had misprinted the screening times and the movie I'd wanted to see had started half an hour ago. However, The Thin Blue Line, playing on the other screen, was about to begin in fifteen or so minutes. Although I'd seen an ad or two with some favorable critics’ quotes, I didn’t know what this movie was. Frustrated, I took a quick glance at a review they’d posted on the wall. I didn’t read too much. It said, “Texas,” “cops,” “thriller,” “gunshots,” “good.” It wasn’t the sort of thing that would have interested me back then, but I didn’t want the trip to the theater be a total waste, so I went in.
The film started, and I immediately decided the trip was going to be a disaster. A documentary??? I might have been a pointy-headed teenage film geek, but even I had my limits. Had I even seen a documentary at that point? One I’d liked? Or at least found worth seeing in a theater? Ugh...
You know, of course, what transpired next. Over the course of 100 or so minutes, I was mesmerized, moved, wiped out. The Thin Blue Line was monumental. I became obsessed with the Randall Dale Adams case. Errol Morris became a personal hero. Hell, years later, I named my son Errol.
Here’s the other thing I took away from that screening. The sense of discovery – the idea of going into something almost completely blindly, without having any idea of what it is, and being astonished by it. The experience made such an impression on me that to this day I’ll still sometimes grab random books off the shelf to read, or watch random movies I know nothing about (which I guess isn’t so hard when you’re a critic). And back when I actually bought CDs I’d sometimes buy random CDs off the shelf. This was how I discovered stuff as diverse as the films of Jack Clayton and Seijun Suzuki, or acts like The Sounds and The Hilliard Ensemble.
Yes, I also saw and read and heard a lot of garbage that way. A lot of garbage. You rarely get The Thin Blue Line. But every once in a while, you make a real discovery that renders the whole crapshoot worthwhile.
Posted by Bilge Ebiri at 10:00 AM