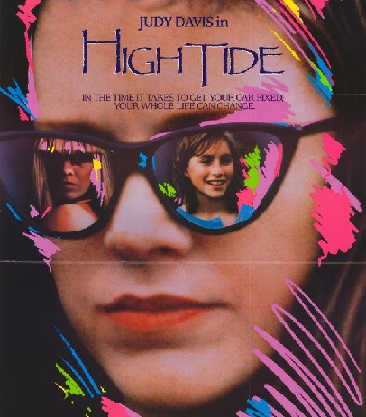 It pains me to no end to call Gillian Armstrong's High Tide a "forgotten" film. Back in the late '80s and early '90s, it was anything but. It was the film people pointed to when talking about Judy Davis's greatness as an actress. It was also the film people pointed to when talking about the brilliance of its director, a woman who would go on to make a number of other masterpieces and near-masterpieces, including Little Women, Last Days of Chez Nous, and Oscar & Lucinda. (Armstrong and Davis had also collaborated on the excellent My Brilliant Career earlier in their careers, a film that put both of them on the map.) But slowly, this staggering, heartbreaking tale of a mother and daughter reuniting started to vanish from viewers' radars. It has never had a proper DVD release in the U.S. -- even in Australia, it was released in a crappy pan & scan edition that is now out of print -- so maybe there were some rights issues that prevented its gaining a wider audience. (It's a gorgeous film, so presentation matters a great deal.) The good news, however, is that it's currently available on Netflix streaming, in a pretty good-looking version, so you could watch it right this very minute if you so wanted.

High Tide opens to the sound of waves and streams of shimmering blue light – as if the camera were moving rapidly across an expanse of water, or a road. But soon we realize that what we’re looking at is actually just a chintzy blue curtain, in front of which a ridiculous Elvis impersonator begins to sing “Johnny Be Good” to what appears to be a crowd of pensioners. We then cut to his backup singers, focusing on one of them – Lillie (Judy Davis), looking equally ridiculous in a platinum blonde wig and a mermaid dress. That opening shot – the illusion of movement and freedom, undercut by static, pathetic reality – perfectly encapsulates the film both narratively and aesthetically.

The film is a study in contrasts and missed connections, highlighted by a surprisingly elaborate visual design. Lillie is a character who drifts through life, seemingly carefree even as she conceals a lot of hurt. “Conceals” is the key word here: It’s often hard to get a read on Lillie, as she wears long dark clothes, dark hair draped over her face, a cigarette in her hand. And Davis’s performance is appropriately terse and tense. Armstrong also obstructs our view of her through camera placement, often framing her behind car windows or in one-third profile. But in setting their film in a seaside community, thus making the dark ocean waves part of the film's visual background, Armstrong and screenwriter Laura Jones are able to convey the tempestuous emotions that hover just beyond the characters' outer layers. Appropriately enough, as the film progresses, the waves behind the characters get deeper and darker, as if Armstrong has somehow managed to harness mother nature herself into a supporting role in the film.

Armstrong and Jones intercut the story between Lillie and her estranged daughter Ally (Claudia Karvan) well before the two characters meet, and they establish the connection between the woman and the girl through the use of counterpoint. While Lillie closes herself off to the world, Ally is a teen in full bloom, constantly seeking to connect to and experience the things around her: In contrast to the way she presents Lillie, Armstrong shoots the girl in almost sensuous close-ups, whether she’s biting an apple, kissing a boy, scraping wax off her surfboard, or feeling the water on her hand as she drifts languorously in a tide pool. 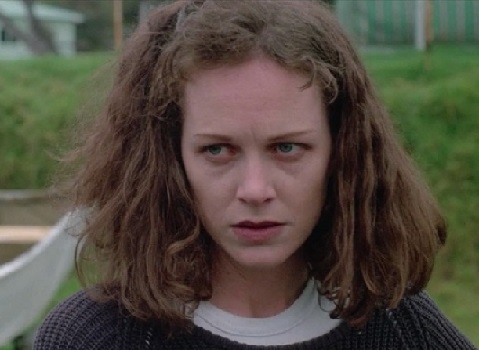 But through the girl, Lillie begins to reconnect to the world. In one of the film’s most touching scenes, she secretly watches Ally shaving her legs for the first time (and making a mess of it) in one of the community shower stalls. Gradually, the film forces Lillie to shed her various skins and fronts. (She even has to shed her clothes; after she’s unable to come up with the money to pay for her car to be repaired, Lillie has to take up stripping – that the film and its characters don’t judge her too harshly for this choice is a testament to the generosity of Jones’s script.)

High Tide is a story about a mother and a daughter – two very different women -- reconnecting through chance and circumstance. (The story actually turns on a dime, and it's to both Armstrong and Jones's credit that we're never distracted by the overwheling role that coincidence plays in the script.) Aesthetically, it’s also a journey of connection, as Armstrong gradually brings her two leads together, working towards the film’s powerful finale: As mother and daughter reconnect, we get a series of rapturous tracking shots that finally, truly unite the two of them stylistically, and also bring them together spatially with the open road. And this time, that highway is not a shimmering illusion, as in the film’s opening, but an actual road, full of freedom, longing, and foreboding. This is one of the most haunting cinematic climaxes of all time – to one of the greatest films of the 1980s.