The Greatest Opening Credits Sequence of All Time 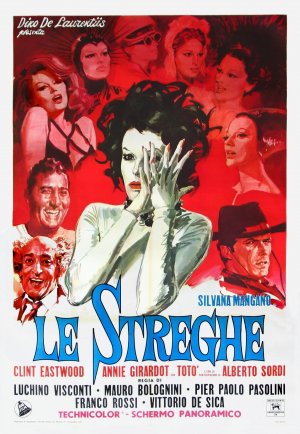 For some reason there's been a lot of buzz recently about title sequences. Of course there's always the estimable site The Art of the Title Sequence, which regularly posts and analyzes opening credits from films. But in the last few weeks, sites like The Fox is Black and The Atlantic highlighted Jurjen Versteeg's cool new short A History of the Title Sequence. Back in February IFC.com did a whole thing about The 50 Greatest Title Sequences of All Time. And for some reason a bunch of my Facebook friends sent around a bunch of credits clips last week. Long story short: This is a great excuse to post what I think is my favorite opening credits sequence of all time, for the amazingly bizarre Italian omnibus film Le Streghe (The Witches). Video after the jump.

Nice, right? One of the great things about credits sequences, of course, is that one can approach them without having to give any consideration to the film in question. Even more so than with trailers, you can just watch the credits and riff drunkenly on the kaleidoscope of wonders they insinuate and promise, even if the film fails to live up to any of them. (That said, there’s a lot more to The Witches than meets the eye, about which more in a bit.)

So, back to the matter at hand: God, do I love the credit sequence to The Witches. And not just for Piero Piccioni’s catchy music and the crazy animation, but because there’s something so beautifully other about it. Sure, there’s a defiantly mid-60s mood to the whole thing, particularly in that twisty score, but at times it feels like a template for a decade that never happened. Or, more accurately, it feels perched between the decade that once was meant to be, and the madness that came after.

The Witches was made in 1965, as an attempt by star Silvana Mangano’s producer-husband Dino De Laurentiis to highlight her range; it consists of five segments, each featuring Mangano in a completely different role, directed by such masters as Luchino Visconti, Pier Paolo Pasolini, and Vittorio De Sica. However, the film wasn’t released for several years (it wasn’t exactly beloved, by either critics or audiences). By the time American viewers saw it, it was 1969 and the world had pretty much gone to hell.

But you can sort of sense that encroaching chaos in these credits -- in their refusal to settle down into anything approaching harmony. The music skips. Sound effects intrude loudly, then vanish in a flash. Photos interchange with hand-drawn figures. The awkward animation sometimes flows smoothly, sometimes devolves into collage. Everything seems to come together and then careens into visual and aural cacophony. And all through it Silvana Mangano dances, dances, dances.

And The Witches itself is a similarly cacophonous film: The five segments, as mentioned above, are wildly divergent. In Visconti’s piece (probably my favorite of the bunch), Mangano is a famous actress on the run from paparazzi; in Pasolini’s, she’s a pseudo-mystical green-haired deaf-mute; in De Sica’s, a day-dreaming, bored housewife married to boring businessman Clint Eastwood(!) Still, despite that aforementioned attempt to highlight her versatility, Mangano didn’t actually have much range to speak of, so she’s either sublimely cool, or sublimely melodramatic, but rarely anywhere in between.

That is not, strictly speaking, a bad thing. In the end, I do love this strange, beautiful, deformed movie. For a glimpse of how weird it actually is, check out the Eastwood-Mangano-De Sica sequence here: