Hard and Soft: The American 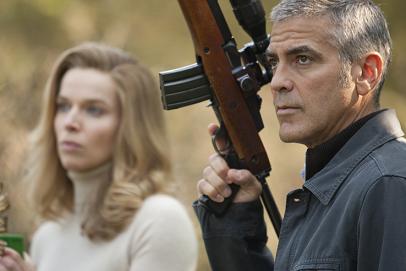 I missed The American when it was in theaters. A shame, because I happened to be working near the Ziegfeld at the time, and I kept meaning to head over there after work – but I also kept hearing about how slow and deliberate and meditative it was, and it seemed fairly certain that I would fall asleep if I went. So I kept waiting for the right moment. And then it was gone.
In truth, I didn’t have high hopes for the film, either. I liked Anton Corbijn’s Control well enough, but found it a trifle overrated at the time. And I pretty much reached my threshold on forlorn-assassin movies long ago.  Also, someone said it was a movie about George Clooney assembling a gun for two hours while occasionally sleeping with a prostitute, and that didn’t seem like something that couldn’t wait.
Needless to say, I’m now kicking myself (especially for missing it at the Ziegfeld), because I finally did see The American (which just debuted on DVD and Blu-ray) several weeks ago, and I’m finding it hard to shake. The funny thing is, it is most definitely a movie about George Clooney assembling a gun for two hours while occasionally sleeping with a prostitute -- even more so than it may seem.
It’s a compromised work, to be sure – whenever an action scene (and I use the term loosely) pops up, the film seems to lose its bearings. But when it actually does focus on the prostitute-bedding and the gun-assembling, it becomes something amazingly plastic and beautiful – a film about texture, taking the very notion of tension and reducing it to its…fundamentals doesn’t seem like the right word…reducing it to an almost atomic level.
I suppose I shouldn’t be surprised that a photographer made this film, for it consists almost entirely of surfaces, but in the best possible way.  Corbijn sets the hard edges of the guns and the machines in the film (there’s also some business about fixing a car, and lots of shots of tools) against the soft curves of his (often naked) women. And, of course, that’s what the narrative is ostensibly about, too, as Clooney’s character finds himself increasingly drawn towards the character of Clara (Violante Placido – which btw would have made a great title for this movie) while dealing with the whole One Last Job situation. That the person he’s building the gun for is also a woman, a lovely female assassin played by Thekla Reuten, seems somehow strangely appropriate. Clooney’s character comes from a world where even the women are hard and murderous. He wants to escape and live in a world of soft edges.
How on Earth did they get away with this thing? On the level of plot, this is some remarkably unoriginal stuff – so much so that even Clooney’s star power doesn’t seem like it would be enough to get the film made (it certainly wasn’t enough to keep the film alive at the box office). But visually this thing is a wonder, a lush abstraction of the most basic kind of movie plot. As such, it’s also one of the most striking and (ahem) underseen films of the year.
Posted by Bilge Ebiri at 7:58 PM