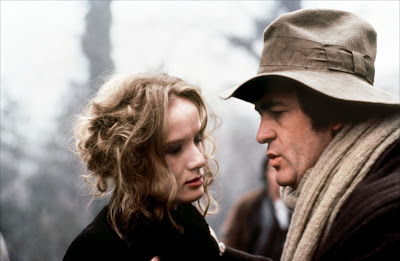 These are interesting times. A fantastic Bernardo Bertolucci retrospective started at MoMA yesterday, and Film Forum  is about to revive The Conformist for a week. So I will hopefully be finding myself in hog-heaven soon, provided I can find some time to actually attend some of these screenings. I'm also hoping to continue writing about some of his films as the retro proceeds. But first, there's some stuff to say.


I've shared this story with many friends over the years, so it may induce some groans from those who know me, but I think I need to recount it here as well. The Conformist -- and Bertolucci's work in general -- was sort of my gateway drug into cinephilia. Although I’d always been interested in “serious” movies, my true obsession with cinema started when I was 14 or so. I used to be in the habit of going to the movies on my own after school, and one day I happened to see the Coens’ Raising Arizona, which had recently opened in the D.C. area. I loved it, of course, but then when I got home I found one of my father’s copies of Film Comment lying around. There was a cover story about Raising Arizona – titled, "Praising Arizona,” by Jack Barth. I don’t remember much from the article, except one almost offhand comparison Barth made between Arizona’s hyper-stylization and Bertolucci’s sensuous camerawork in The Conformist. (BTW, I’m glad he made the comparison for purely autobiographical reasons, but it now strikes me as slightly insane.) 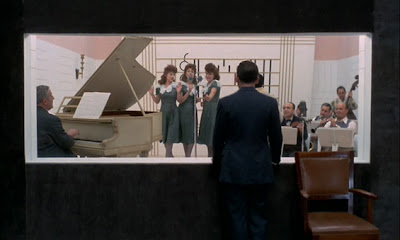 Dad also happened to have a copy of The Conformist lying around (he had lots of tapes lying around, it should be noted), so I decided to watch it. I saw it, thought it was beautiful, but couldn’t quite figure out what was happening in it. But it was such an inviting film -- with its lovely, lush surfaces, its mysterious atmospherics, and its unsettling tone (oh, and also its beautiful female actresses). So I rewound it and watched it again, that very evening.  By the time the week was over, I’d watched it another four or five times, and I’d probably seen it ten times before the month was over. I became obsessed with Bertolucci right then and there, and with Italian and French cinema in general soon thereafter.
This happened to be a fortuitous time to develop such obsessions – soon thereafter The Biograph Theater ran The Spider’s Stratagem and 1900, and The Last Emperor opened theatrically later that year. Meanwhile, the AFI ran The Gospel According to St. Matthew (by Bertolucci’s mentor, Pier Paolo Pasolini) and the National Gallery of Art mounted a huge retro of films by Godard (his other mentor). And, basically, I was off to the races.

You can find a reasonably thorough overview of Bertolucci's career that I wrote for Senses of Cinema years ago, here. One of the reasons I wrote it was to mount a defense of the later films, which seem to me as intensely personal as the early films, although his later protagonists (except for The Dreamers) tend not to correlate directly with Bertolucci's own history as cleanly.

I've got an interesting slideshow interview with Bertolucci up at Vulture, where I go through some of the more memorable scenes in his oeuvre and get his thoughts on them. We had to do some cutting to get it down to ten. So I thought it might be fun to include two of the scenes we cut, both from The Conformist, here:

Scene: In a sequence cut from the original release of the film, Marcello Clerici (Jean-Louis Trintignant) attends a party thrown in his honor, attended entirely by blind people.
Bertolucci: The producers of the film told me, “It’s two hours, five minutes. Why don’t you cut a few minutes?” And this scene was about five minutes. So I was able to cut this scene without touching the rest of the movie. And then ten, fifteen years later somebody had to bring a new print from the original negative. And they said, “There’s a difference in length here.” And I remembered that sequence, and I decided to put it back. It’s like when I was going around to film festivals with 1900. For the screening for the critics in the morning, I would cut away a sequence in the projection booth. And then for the screening in the evening I would put it back. It’s a way to keep your relationship with the movie alive, even when the movie is supposed to be locked – I hate that word, “picture lock.”
Scene 2: Marcello and Giulia make love on the train.


The Scene: Marcello and his new wife Giulia (Stefania Sandrelli) make love on the train, while the window behind them shows very consciously cinematic projections of landscapes.
Bertolucci: I was thinking of American movies of that period, and of outside windows of cars and trains in those movies, where they used transparencies and rear projection. So I began to think of the window of the train as almost like a movie screen itself. And I wanted to convey the sense of time passing really fast. So we showed the sun, and then a red sunset, and all that. Also, we were shooting in a studio, and I don’t like shooting in studios in general. They’re places with no story, no smell. The walls of a real room or a real house communicate something that you can’t have in a studio.
I like to shoot trying to follow the architecture which I find. This is what’s always exciting about shooting in a real location. You can’t say, “Take out that wall” or “Move that wall over there.” You have to come up with an idea. So often I feel like my movies are a way of discovering the architecture of a location: The Forbidden City, for example. I think my movies are very dense, and often I think this lends the density in a way. It’s not visible, but it will somehow make it into the body of the film. The real location gives you ideas. It gives you the limits. In a studio you have no limits. If you shoot in a real location, you have to be able to move like someone who is blind, feeling around for the furniture and the walls, and I find that very exciting.
Posted by Bilge Ebiri at 10:00 AM