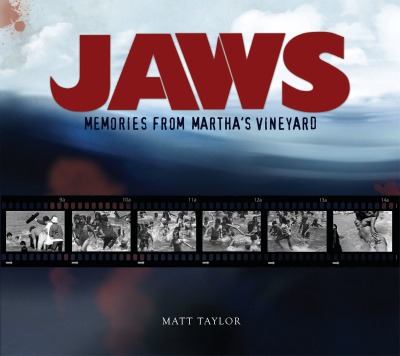 Many serious film types have an allergy to coffee table books about movies. Maybe it’s the price (if you bought too many of these things, you probably wouldn’t have any money to spend on seeing actual movies). Or maybe it has something to do with a perceived superficiality – why spend time with large, glossy pictures when you can pore over a dusty, dense bit of theory or a thick biography.  Of course, there are exceptions: Taschen’s Stanley Kubrick books are a perfect example of big, expensive art books that are nevertheless seen as essential reading as well.
To these I think I can add another one. Jaws: Memories from Martha’s Vineyard, written by Matt Taylor and with a foreword by Steven Spielberg himself, is a dense, beautiful (and relatively inexpensive) volume full of anecdotes, interviews, photos, illustrations, and contemporaneous articles about the 1974 shoot of Spielberg’s blockbuster on the island. Of course, the culture at large has an image of Martha’s Vineyard as some kind of haven for wealthy elite types (witness the media silliness over Obama’s recent visit there) but its actual residents appear to be anything but. And Jaws is a film whose shoot was deeply intertwined with the community at large: town residents actually played parts in the film, and the film itself is steeped in a unique kind of atmosphere that no studio set would ever have been able to match.
It’s also valuable for the way that it portrays a key dynamic of certain films shot on location. To you and me, Jaws will probably always be a two-plus-hour thriller defined by its scenes of terror, its performances, etc. To the people who worked on it, however, it will have been a real-life experience, locatable in time and place -- an extended time spent somewhere different, around people who were quite different from the usual Hollywood crowd.
From the couple of times I’ve worked on location shoots, I can vouch for the fact that this isn’t just a minor angle on filmmaking: Sometimes, a movie becomes its location, and vice versa, as Jaws did with Martha’s Vineyard. There are other examples, and of course I’d love it if some visionary publisher decided to give those films and locales a similar treatment: Woodstock, IL and Groundhog Day; Marfa, TX and Giant (the shooting of which also inspired the Robert Altman masterpiece Come Back to the Five and Dime, Jimmy Dean Jimmy Dean [which wasn’t shot there, alas]); and, of course, Smithville, TX and The Tree of Life.
Anyway, it’s a great book, beautifully laid out and lovingly detailed. And any fan of Jaws should consider owning it. Hell, any fan of the filmmaking process should consider owning it.
Earlier this summer we conducted a brief interview via e-mail with author Matt Taylor, about his book and about the strange intersection between Martha’s Vineyard and Jaws. Here it is. 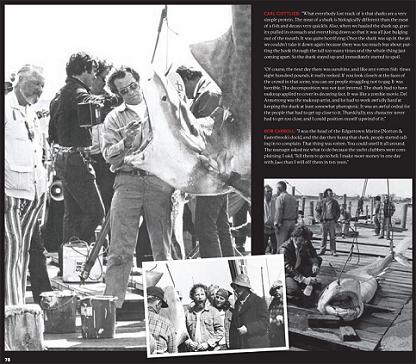 Looking at this book it's apparent that Jaws simply would not have been the same movie if it had been made elsewhere. How did MV's local culture and attitudes affect what the production was able to get on film?
Well, the first thing that comes to mind is the wonderful quote that came from Shari Rhodes, who was the location scout. In the book, she's quoted as saying, "The greatest thing about the Islanders we cast for the movie was that they didn't know enough about acting to be intimidated."
Spielberg wanted his actors to sound less scripted, and more everyday, and loose. For the lead actors, he allowed a lot of improvisation to create a very natural, real-life type of tone.  For the secondary roles, which were filled primarily by Islanders, the filmmakers wanted an equally realistic, everyday feel for the characters, and so doctors were cast as doctors, selectmen were cast as selectmen, and so on.
What about the island's geography?
The island is obviously a pretty geographically isolated place, and so it was a lot cheaper to cast locals in the movie, who wouldn't have to be put up in hotels. I think, too, that they saved considerable money by not using Boston-area SAG members for a lot of roles, such as Mrs. Kintner, who was played by Lee Fierro.
And so Martha's Vineyard provided the perfect, old-time New England backdrop, a smooth, sandy ocean bottom with perfect depths for the mechanical sharks, and a bevy of locals who were so far removed from filmmaking and Hollywood that they were able to bring a kind of weathered feel to the film that would have been impossible to achieve with trained Hollywood actors.
The locals had obviously seen the making of the film up close behind the scenes, but when Jaws was released, did it scare MV resident participants as much as it did the rest of the nation?
Yes. Multiple locals I interviewed for the book who had roles in the film all reported jumping out of their seats at certain points in the film -- just like the rest of the world, and despite the fact that in many instances, they were just a few feet away from the camera when the scenes were shot. Susan Murphy watched the filming of the scene where Roy Scheider is chumming and the shark comes up, and even though she knew what was about to happen the first time she saw the movie, she jumped just as high out of her seat as the rest of the audience.
What kind of cooperation did you get for the book from the filmmakers and actors involved in the film?
The people we involved from the Hollywood faction provided enormous amounts of material for our book, most notably production designer Joe Alves, screenwriter Carl Gottlieb, production executive Bill Gilmore, and Shari Rhodes. I wanted to include quotes from those particular people specifically because they worked most closely with the islanders involved with the production. In the beginning, I was leery about including any of the Hollywood people because I was afraid it would make the book feel too much like a traditional, Hollywood "making of" story, and I didn't want to jeopardize the book's small-town, "Hollywood comes to Mayberry" type feel.
Did any of the filmmakers, cast or crew revisit the island in subsequent years and decades? Did any of them make MV a regular vacation spot or even residence?
I know that Michael Chapman, the camera operator, kind of "discovered" Martha's Vineyard while shooting the movie, and subsequently, has had a house here for many years. Richard Dreyfuss has always come back, too, I think for a bit just about every summer since 1974. I spoke with Joe Alves the other night on the phone. He was just here on the island 2 weeks ago for the book launch. It was his third time ever on the island. He just seems to love it here so much, and I told him, "I think you made a mistake when you decided not to buy a house here 37 years ago." His reply was, "I know. I do, too."