“Well Gentlemen, I Think This Calls for Champagne All Round.” 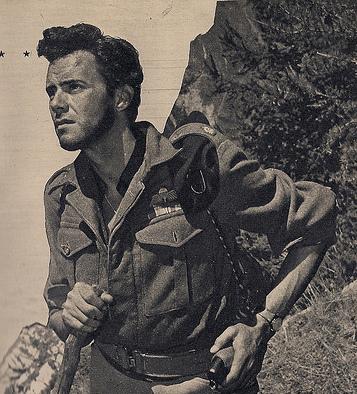 Everybody should read this tribute by Christopher Hitchens to the recently deceased Patrick Leigh Fermor, an adventurer, “scholar-warrior,” and travel writer who was one of the heroes of an amazing feat of WWII derring-do on the island of Crete in 1944 – an event immortalized in Ill Met by Moonlight, a terrific (and terrifically underseen, sadly) Michael Powell-Emeric Pressburger film. Dirk Bogarde played him, lucky sod.


Leigh Fermor had lived in Greece before the war, had taken a part in the revolution of 1935, and had seen the German invasion sweep all before it. He spoke the language and loved the culture and could be fairly inconspicuously infiltrated onto the island of Crete. In 1944, with the help of some British special forces and a team of Cretan partisans, he managed to kidnap the commander of the German occupation, Gen. Heinrich Kreipe, and carry him over a long stretch of arduous terrain before loading him into a fast motorboat that sped him to Egypt and British captivity. The humiliation of the German authorities could not have been more complete.

The piece itself is not so much a lament for this brand of hero as it is a reminder that they do exist – while Leigh Fermor may have been “the last and perhaps the most Byronic of this astonishing generation,” Hitchens concludes that “for as long as he is read and remembered, the ideal of the hero will be a real one.”

We often criticize movies for glorifying things like combat, but it’s also a fact that these types of stories have an important place in our civilization: Myths are the tales (and sometimes lies) we tell ourselves to maintain our social contract with one another. They can help inspire our nobler impulses. But sometimes the cinematic heroism can take a rather cartoonish life of its own: In his ode to this generation, Hitchens also references one of my personal heroes: the great Fitzroy Maclean, author of the amazing books Back of Beyond and Eastern Approaches -- and, as it so happens, one of the inspirations for James Bond.
Posted by Bilge Ebiri at 8:00 PM