All That Will Be Left Is Us: Revisiting A.I. 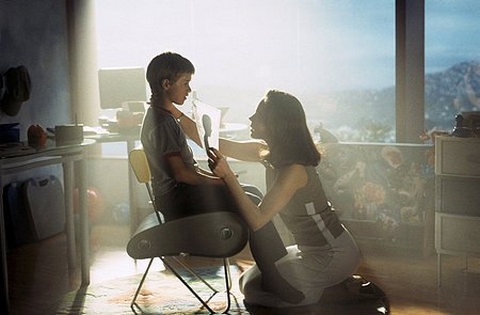 I cannot overstate my complicated emotions when I first saw A.I. Artificial Intelligence back in 2001. Here was a film that I’d anticipated for nearly a decade: First when it was to be directed by Stanley Kubrick; then during that somewhat confusing period when Kubrick was making Eyes Wide Shut, with A.I. supposedly to follow, either directed by him or produced by him with someone else directing; and finally, of course, that sad time after Kubrick’s passing, when the prospect of Steven Spielberg directing the film tore up many a Kubrick fan.
Although I loved Spielberg – and despite the fact that we were repeatedly told Kubrick himself had chosen him to direct A.I. -- I wondered if he was right for it. For so many years, Spielberg and Kubrick seemed like polar opposites. Spielberg’s films indulged in very direct emotions that hinged on audience identification with seemingly ordinary characters. (Even Indiana Jones was ultimately just a wisecracking average joe.) Kubrick’s films were no less emotionally resonant, but they worked on structural irony, on the delicate interplay between a narrative’s relentless progress and the characters’ own ambitions. Kubrick built elaborate traps, both for his characters and his audiences; Spielberg sang songs to freedom and innocence.
Maybe this says it all: Kubrick’s A.I. had been more than a decade in gestation and planning, shrouded in complete secrecy. Spielberg wrote and shot his movie in less than two years, and there was a BagelCam on set. You can understand why a diehard Kubrick fan might have been suspicious.
A.I. recently came out in a beautiful-looking Blu-ray edition, offering an opportunity to revisit it. I’ve grown to love the film over the years, despite my many issues with it. But watching it is still a complicated experience. Both my frustration and my fascination come from the strange tension between its two creators, between the project it once was and the film it eventually became.
That very first scene of William Hurt’s Prof. Hobby introducing to his colleagues his vision of a robot that can love offers a telling example. Kubrick excelled at filming mundane conversations – something that Spielberg desperately avoids in his films, mining even the simplest exchange for drama or humor. Hobby’s monologue isn’t exactly about a mundane topic (as one coworker notes, his presentation begs the moral question of whether humans can love their robots back), but one can imagine how Kubrick might have filmed it, highlighting the dry, everydayness of even this most mind-blowing of revelations. (“Deliberately buried, huh?” “Well, how about a little coffee?”)
In what feels like a genuine nod to Kubrick’s influence, Spielberg does something deeply uncharacteristic and admirably out-of-his-comfort-zone here, de-sensationalizing a momentous event. But it never quite feels genuine to me. Maybe it’s that he hasn’t quite found the kind of comfortingly anonymous actors Kubrick often used for scenes like this (Hurt seems like he’s just chomping at the bit to start Capital-A-Acting), or maybe it’s that the scene is surprisingly cerebral, less a team meeting and more a philosophy lecture.
But then something happens, right at the end: Present at the meeting is Sheila, a female robot, to whom Hobby has asked to define love. (“Love is first widening my eyes a little bit and quickening my breathing a little and warming my skin…”) As the meeting ends, we see Sheila blithely applying make-up to her face. Then we cut to a car speeding down a forest path. Inside are our robot-hero David’s (Haley Joel Osment) future parents Henry (Sam Robards) and Monica (Frances O’Connor), with Monica applying makeup to her face in almost the exact same way. (It helps that the two actresses look similar, too.) It’s a total throwaway moment, but it’s somehow also a deeply resonant one, suggesting that we all – robots and humans alike – put on different faces to present ourselves to the world.
That kind of subtle offhand moment is something Spielberg has always excelled at, and he rarely gets credit for it. For example, there’s that great little bit in Empire of the Sun, when, right before the Japanese invasion, Jim (Christian Bale) starts exchanging light signals with a ship in the harbor. His messages are immediately followed by a gigantic explosion, and it seems, for one brief instant, that Jim has caused all this to happen -- introducing an odd sense of guilt that permeates and informs the whole film. Same with this moment in A.I. This is, after all, a film about how we all build the things of humanness around us to one degree or another. 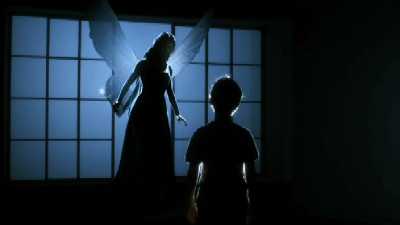 ﻿Some of Spielberg’s best filmmaking is in here, moments when I can see why Kubrick might have felt he would be right for this. It’s certainly a very personal film for the director: As the father of both biological and adopted children, Spielberg may well have projected his fears about his kids and the problem of acceptance onto the scenes of David and his human “brother” Martin (Jake Thomas) learning to live with one another. The sensitivity with which he films the moments between the two kids is stunning.
There’s also something touching about the notion of Kubrick even considering Spielberg for this project. The film has the feel of a fairy tale – obviously, since the story of Pinocchio plays such a big role in David’s journey – and there was a time when Spielberg was seen by some as a legitimate heir to Walt Disney (the mad visionary who made the dark childhood masterpieces, not the uber-sanitized modern-day corporate brand). As Spielberg tackled more complex and serious movies over the years, perhaps Kubrick began to see him growing into the ideal candidate for tackling A.I.’s tale of manmade innocence lost.
Which brings me to the one scene in A.I. where my impressions have changed quite a bit over the years. It’s a seemingly small moment, but it’s also the dime on which the whole story turns. Monica reads the story of Pinocchio to the two boys, and David, sitting in the corner away from his mother and Martin, suddenly finds himself inspired by it. (“You can imagine how astonished he was when he saw that he was no longer a puppet, but a real boy, just like other boys.”) The first couple of times I saw it, this didn’t make much of an impression on me – fatal for the film, rendering David’s journey to try and recreate the story of Pinocchio little more than a clunky story device. Watching the scene again recently, my eyes welled up with tears. I don’t know why it felt so different this time around. Is it because I now have a son and think a lot about the things that may or may not inspire him? Is it because Haley Joel Osment annoys me less now than he did back then? Is it because Spielberg himself hasn’t worked this angle for many years now – so much so that A.I., made just ten years ago, feels like something from a very different era? At the time, I bristled at the notion that Spielberg had taken Kubrick’s pet project. Now, I wish Spielberg would make more movies like this.
Of course, there are plenty of scenes in A.I. that I’ll probably never come around on: Everything about the Doctor Know scene is irritating, right down to the faux-earnest tones with which Robin Williams delivers the excerpt from Yeats’s “Stolen Child.” (Indeed, that whole Rouge City sequence falls flat, even on a technical level: It all feels a little too weightless and computer-generated.) And the Ben Kingsley-voiced exposition that prefaces the powerful final day with mother at the end still threatens to bring down the whole enterprise. But these seem like increasingly minor quibbles. A.I. may not be Spielberg’s most perfect film, or his most powerful, or even his most personal. But it’s become, after all these years, his most unforgettable.
Posted by Bilge Ebiri at 2:00 PM