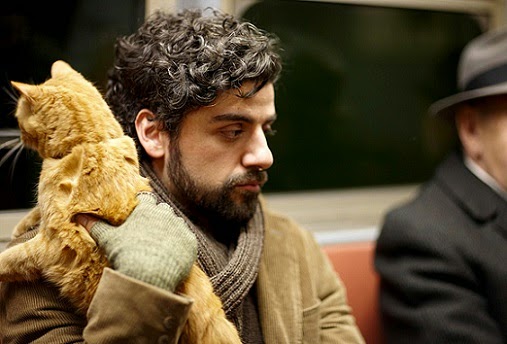 A mesmerizing, haunted red herring of a movie, the Coen Brothers’ Inside Llewyn Davis is full of glancing blows and half-hidden truths. Every once in a while some kind of meaning or pattern emerges for just a brief shimmering second and then disappears from view, like the cats that keep slipping away from our lonely, dour protagonist. But if this beautiful film seems unnaturally elusive, there’s a good reason for that: The real story is happening somewhere else.


[Here there be spoilers, so tread at your own risk...]

When we first meet Llewyn Davis (Oscar Isaac), a talented but melancholy and abrasive singer on the early 1960s Greenwich Village folk music scene, he’s performing in front of a small, admiring crowd at the Gaslight Cafe. Later, outside the venue, a mysterious man in a Stetson accosts Llewyn and kicks the shit out of him. The Coens then cut to our hero as he wakes up the next morning in the apartment where he’s crashing, his friends’ cat perched on his chest. As he prepares to leave, Llewyn tries to keep the cat from escaping, and accidentally locks himself out of the apartment.

So, basically, our introduction to this guy involves him singing a beautiful song, being beaten, and saving a cat – a perfect triumvirate of Hollywood code for “good guy.” Except that Llewyn isn’t the nicest of guys. He antagonizes his friends, he scoffs at other musicians, he dismisses his family. Nor is he much of a businessman: He signs away his royalties on a potential hit record because of an immediate need for money. He has some semblance of what he might call integrity, but what others might call entitlement, or short-sightedness.

We all know people like this; we have all been this guy at various points in our lives; some of us still are. (To rearrange the words of the title, there's a little Llewyn Davis Inside all of us, sort of the way That Barton Fink Feeling was something we could all access.) Llewyn is a bit too serious about his art to ever truly sell out; whether he’s good enough to succeed without doing so isn’t a question the film dares to answer. With a lucky break here, a not-unlucky-break there, who knows what might have been? Speaking with Jean (Carey Mulligan), a fellow folkie whom he impregnated and who now hates his guts, Llewyn divides the world into “careerists” and “losers.” And he refuses to be a careerist, which basically leaves him with one option.

So, Inside Llewyn Davis is the story of the guy who didn’t make it. His whole journey, posited at first as one of the Coens’ patented Odyssey variations, is full of symbolic, ominous figures and situations….but they pointedly signify nothing. Take the cat, who escapes from Llewyn several times, and is abandoned by him at least twice later on. Near the end of the film, when he returns to New York, Llewyn revisits his friends’ apartment, and discovers that their cat has returned. Not only that, the cat’s name is Ulysses! And its nickname is Lou – which is the same name that a couple of other characters have accidentally called Llewyn over the course of the film. (“What does the ‘N’ stand for?” John Goodman’s decaying, contemptuous jazz musician asks him at one point.) As he walks to a gig at the end of the film, with things seemingly, finally looking up, Llewyn spies a poster for Disney’s animals-go-on-the-road flick The Incredible Journey. Is that even a slight, ironic smile we see on his lips?

Except that this is not his journey. Llewyn’s ordeal was not incredible. His name is not Lou, as he himself keeps reminding people. And the cat he’s been carting around for most of the film is not Ulysses, who ran away from him early on. It’s a nameless street cat Llewyn accidentally picked up back in New York, a cat we last saw limping into a frozen forest beside a snowbound highway. And that opening scene we saw earlier – with the strange man beating Llewyn -- was not the opening scene of this story; it was the finale. The whole film, it turns out, was a flashback winding its way back to this moment.

Importantly, there are a couple of very big differences in the way the Coens now re-present this final section of the film. For starters, they include one additional song that Llewyn sings before he leaves the stage: “Dink’s Song,” which includes the refrain, “Fare thee well, oh honey, fare thee well…”(Pointedly, it's a song Llewyn used to do with his now-dead partner.) Secondly, the Coens alter the sound mix, so that we now hear, filtering out of the Gaslight Café as Llewyn is beaten, the music of the act that followed his performance: It’s Bob Dylan, singing “Farewell,” a song with lyrics remarkably similar to the one Llewyn just wrapped. (“Oh it’s fare thee well, my darling true....”) These lyrics are also echoed in the final line of the film, a close-up Llewyn, badly beaten, whispering, “Au revoir.”

The film fades to black, and the Dylan song, victorious, plays over the end credits. Somewhere along the way, you figure Dylan has been on his own, significantly luckier trajectory – maybe like the Incredible Journey that Ulysses the cat must have been on. But we didn’t see that journey. We saw the other journey -- the one with some loser named Llewyn and a nameless, wounded cat. In many ways, that's the journey the rest of us are also on.