"A Vessel Grim and Daring": Some Thoughts on Spielberg's Lincoln 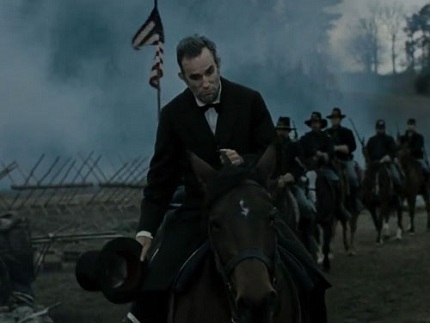 The more I think about it, the more it seems that Steven Spielberg’s Lincoln – which I caught at the New York Film Festival some weeks ago -- might actually be some sort of masterpiece. I loved it when I saw it, but it’s also grown in my mind since then. I’ll be writing more about the film after I see it again, but for now I wanted to make some observations that struck me both as I watched it and as I reflected on it afterwards.

I would have expected a film like this to try and humanize Lincoln in the usual ways – to show him in moments of fallibility, or pettiness, or weakness, in an effort to counter our image of him as the ultimate American Saint. The film does give him human shadings, to be sure – this is a Lincoln who has bad dreams, who fights with his wife, and who even tells a dirty joke or two – but its portrait of him also feels idealized, and pointedly so. We first see him (at least, in the work-in-progress version screened in New York) as he meets with four Union soldiers (two white, two black) after a battle, and the soldiers are clearly starstruck, reciting the Gettysburg Address back at him. The scene doesn’t exactly feel like something we might see on an ordinary day in the Civil War; rather, this Lincoln feels like he's already halfway towards becoming a myth.

At the same time, there’s a tension here between the affection and awe these men have for their President and commander-in-chief, and the political machinations that Lincoln and his allies have to indulge in to get the Thirteenth Amendment passed, which is what the film is actually about. And so, the movie hovers somewhere between the mythic and the real. Spielberg and screenwriter Tony Kushner’s portrait of the Lincoln White House is as a place where the ideals of liberty and the ghosts of slavery interact with the base calculations of realpolitik.

Kushner's Angels in America, of course, presented us with a highly symbolic “fantasia” of personal stories, history, and metaphysics; it was a world where individuals, historical figures, and spectral beings interacted and conjoined, sometimes played by the same actors. Though Lincoln is more grounded in reality, scratch its surface and I think you'll find a similarly complex network of symbols and myths. This time, however, Kushner’s mytho-poetic conceits have been joined to the power and clarity of Spielberg's direction. The results are awe-inspiring.

I was particularly moved by the way the film depicts Lincoln’s youngest son, Tad, who is always dressed in a child’s Union Army uniform, and is constantly seen looking through photographic plates of former slaves. The child, though based on a historical figure (who did indeed run wild through the White House), thus becomes something of a ghost, or an angel – a figure in whom America’s past, present, and future merge. The son might, in a sense, represent the nation's conscience -- both its broken promise of freedom and its belief in a higher purpose. So perhaps it's telling that when the climactic vote on the Amendment is being taken, Spielberg cuts to a shot (based on an iconic image) of Lincoln reading to Tad.

Even more pointedly, he chooses to show the assassination through the boy's eyes: In what might be the most heartbreaking scene Spielberg has ever directed, a boy crying out for his dead father effectively becomes a nation's ideals screaming for their fallen guide. One is reminded of Walt Whitman’s immortal poem about Lincoln’s assassination:

My Captain does not answer, his lips are pale and still;
My father does not feel my arm, he has no pulse nor will;
The ship is anchored in a terrible place, its voyage still alive;
From fearful trip, the victor ship, comes in with object won;

The more I think about it, the more I’m convinced that in this one little moment, Kushner and Spielberg have mapped out the entire next century of American racism and division. And I won’t be able to shake the scene – or this movie – for quite some time.