Titanic: The Chaos Dark and Rude 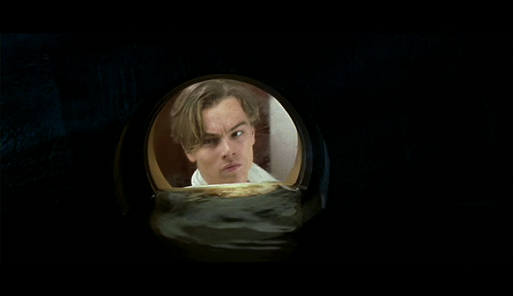 I saw Titanic so many times in the theater when it first came out that I was practically made an honorary thirteen-year-old girl. (I know I’ve made that joke before, but it’s a good one, so whatever.) I think I caught it nine or ten times during its theatrical run. This wasn’t easy, because, for all the film’s acclaim and success, in my circles (and by “circles,” I mean basically, “my then-girlfriend’s friends”), it wasn’t regarded very highly. In fact, I seem to recall a couple of lengthy dinners where I was mocked mercilessly for my love of the film.

I never quite managed to explain why I loved Titanic so much. I mean, sure, it’s big, it’s beautiful, it’s tragic, I cried, etc. But when I tried to make an actual case for the movie, more often than not I found myself explaining why I didn’t hate it, or at least didn’t hate certain things about it. For example, the dialogue between Jack and Rose never bothered me, simply because I accepted them as kids. (If Rose is 101 years old during the present-day scenes, and if the present day is indeed 1997, then she’d have been 16 years old in 1912.) The big, blustery emotions of the film didn’t bother me either; despite all his proficiency with technology and special effects, Cameron has always had a way with melodrama that marks him as an old-fashioned director at heart. Dana Stevens is right when she notes that, having originated during a suicide attempt, “far from being a moony-eyed gazefest out of a Nicolas Sparks novel, Rose and Jack’s love is presented as a matter of life and death from the start.”

No, to get at why I love Titanic so much, I may need to flash back a little further.


All my life, I’ve been obsessed with the sea. My childhood hero was Jacques Cousteau. Most of the first movies I saw were sea movies – Orca the Killer Whale, Tentacles, The Deep, Warlords of Atlantis, etc. Jaws was, I think, the first non-kids book I ever read. In Turkish. (Before that, I’d made my grandfather read me Moby-Dick, not that I understood any of it, except for the white whale part.) One of the main reasons why I wanted to learn English was to be able to read all the English-language scuba diving books we owned. (I don’t think we had scuba books in Turkey back then; places where the water was beautiful were where we used to exile prisoners.)

The more you learn about the sea, however, and the more time you spend in it, the less you know about it; you can never categorize it and put it in a box. On the surface it’s all horizon and possibility, underneath it’s an endless dark expanse, and you can’t have one without the other. The more obsessed I became with the sea, the more my familiarity bred a certain kind of fear. Spending a fourth of the year at the beach I’d go diving all day, while at night I’d have dreams about all the people I knew being buried underwater, surrounded by armies of moray eels. 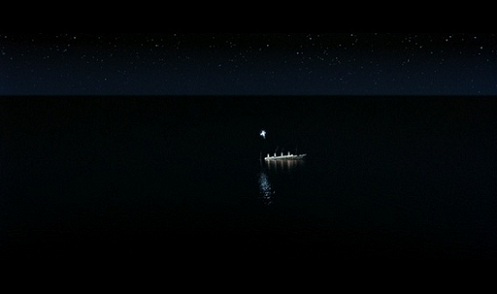 So, perhaps needless to say, all my life I’ve been looking for a great sea movie – one that can capture this paradoxical awe.* James Cameron, given his well-documented love of the sea, always seemed on the verge of making such a film. (The Abyss came close, but in many ways it’s really a space movie that happens to take place underwater, which becomes clear once the aliens show up.) Titanic was that movie for me. I could sense it right from the beginning, with the first post-opening credits shot, in which we glide past a yellow submersible drifting down under the water, until it becomes enveloped by darkness.

These early scenes work Cameron’s love of machinery and exploration, his engineer’s mind. We see the wreck, 13,000 feet underwater, and the half-cavalier, half-analytical way with which Bill Paxton and his team approach the sunken ship. As they salvage the wreckage, Cameron bathes them in a harsh, realistic light. All that, of course, will change. The whole film is a process whereby the ocean reclaims its mystery; all of Paxton’s know-how and doodads become impotent in the face of the infinite darkness the water represents, not dissimilar to the way that the sunken ship itself, a miracle of modern technology at the time, was consumed by the dark waters of the North Atlantic. By the end of the film, we may know more about Jack and Rose and the Titanic, but we know less about the sea that took them. “You don’t fuck around with the infinite,” as they said in Mean Streets.

In one of the film’s most celebrated moments, Jack and Rose stand at the bow of the ship, where, making her stand with her arms outstretched, he has just given her the exhilarating sensation of flying, miles of open sea before her. They then kiss, and as the camera glides around them, the beautiful ship at sunset transforms into the decaying wreck at the bottom of the sea. Dissolving slowly, the young lovers seem for an instant to be caught underwater before they disappear, their final relic Rose’s windswept shawl, a vague phantom fluttering in the depths before it too vanishes. The shot doesn’t end, however, as we now see that we’re watching the wreck in a monitor, and the camera pulls back to reveal aged Rose, looking at the bow where she enjoyed that first passionate kiss.

* And there have been a couple over the years: Luc Besson's The Big Blue, for example, is a film that gets me every time in ways that any number of objectively superior films never will. I could say something similar for Wes Anderson's The Life Aquatic with Steve Zissou.