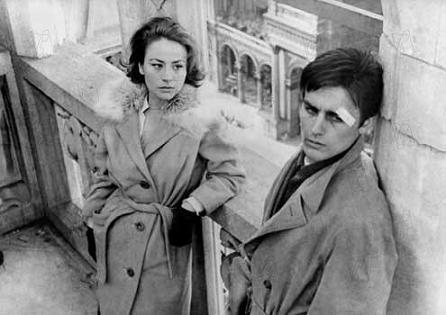 Here we go with another obituary. Darn.

I hadn’t thought of Annie Girardot in a while. Then I heard the news of her passing, and the memories came raging back. I must have watched and re-watched my crappy tenth-generation VHS dub of Rocco and His Brothers dozens of times when I was in high school (thanks, Facets by Mail!), and as much as I was impressed by all the stuff I was supposed to be impressed by – Visconti’s direction, Nino Rota’s music, Alain Delon’s soulful innocent, Renato Salvatori’s tormented, eye-rolling antihero, etc. etc., it was Annie Girardot’s Nadia that I found most captivating at all.

In part, it’s because she was (duh) beautiful. But it wasn’t just that. Nadia was both high and low – a temptress (she was, after all, a prostitute) with genuine earthiness and confidence in her skin. (The way she offhandedly plays with and caresses her legs was one of the sexiest things I’d ever seen.) She wasn't a femme fatale, but rather someone you might conceivably meet on the street. Okay, maybe not my particular street, but I think you know what I mean.

But as the film rolls on, this naturalistc, seemingly everyday character becomes something else entirely – a tragic, operatic figure. Of course, Visconti specialized in this sort of thing – as his stories progress, his characters often gain mythic dimensions, be they bourgeois industrialists who become Oedipal Nazi monsters or virginal, impressionable kings who become mad symbols of aesthetic-spiritual abandon.

Visconti was a deceptively great director of actresses. Even though most of his films tend to be ostensibly about men, the women resonate in dramatic ways. In the end, isn’t The Leopard as much about Claudia Cardinale as it is about Burt Lancaster? Isn’t Ludwig as much about Romy Schneider as much as it is about Helmut Berger? And, let’s face it, isn’t Rocco and His Brothers as much about Annie Girardot as it is about Delon and Salvatori?

David Hudson has a nice roundup of links at the MUBI Notebook, here.