When I first saw Gaspar Noe’s Enter the Void at Sundance earlier this year, I actually emailed someone immediately afterwards: “This is the greatest [expletive] movie I’ve ever seen.” (The message may have been all-caps; I choose not to remember.) I knew at the time that I was overstating the case a bit, but I can confidently say that the rush of seeing the film didn’t wear off for weeks afterwards. Anyway, it may not be the greatest film ever made, but it is still my favorite film of the year, and will probably be my favorite film of last year as well, once this year’s round of Top Ten Listing is over and it takes its rightful place among 2009 releases (which is when it actually premiered at Cannes).

So, you should see it. And you should also read my interview with Noe, now up on Vulture. I wish I could write more about this film, but the simple truth of the matter is that I don’t think I could do it justice after one viewing, especially one eight months ago. So, maybe I should see it again, too. In the meantime, I have two items to share:

1.) A review that is very much after my own heart can be found here, courtesy of Andrew O’Hehir in Salon, who wrote about it at Sundance. Here’s a sample:

There's no way to summarize the paranoid, terrifying and surpassingly beautiful lysergic odyssey between life and death on which Noé takes us, except perhaps to explain that he has said his principal influences here are Kubrick's "2001: A Space Odyssey" and the "Tibetan Book of the Dead," and by God, he has the verve and the special-effects budget to pull it off. In previous hotly debated films like "I Stand Alone" and "Irreversible," Noé has combined a dazzling visual imagination with what seemed like a juvenile desire to brutalize the audience with acts of traumatic violence…

Noé has here completed a journey he began with "Irreversible," a film in which you could first see his desire to dissolve the distinctions between past, present and future, between happening and not-happening, between the physical landscape and the mental one, between life and death…

This is a daring, thrilling, awful and wondrous film that pushes so hard at the medium's boundaries it sometimes becomes exhausting. With this movie Noé jumps to the front rank of mindfuck acid-trip filmmakers, right next to David Lynch, and I wandered out afterward into the Utah snow feeling dazzled, dizzy, exhausted, grateful.

2.) Noe has a reputation for making nasty, unpleasant movies, a criticism which never quite registered with me. I actually find his films to be enthralling and beautiful. That’s not to say I don’t find some of his scenes to be horrific and ghastly: Irreversible opens with what is still the most gruesome, unwatchably graphic scene of violence I’ve ever seen. But the overall journey of the film – a revenge story told backwards over the course of one night, so that we begin with a terrifying act of vengeance, then move back in time, scene by scene, to the rape that precipitated it, and then even further back to the vision of domestic bliss that was destroyed by the events of this night -- is a far more complex and spiritual one. I awkwardly try to get at it a bit in one of my questions in our interview:

"Despite your reputation for making brutal films, I've always found your films to be strangely uplifting. Both Enter the Void and Irreversible end on sublime, maternal images. Irreversible is telling its story backwards, but it's also, when you think about it, telling a linear tale about Vincent Cassel's character's evolution -- people call him an "ape" and a "primate" throughout the movie -- into someone who will understand the futility of revenge." 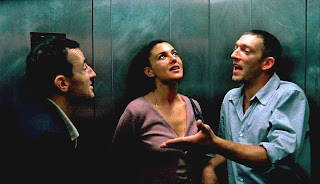 His answer reveals nothing, nor does it even suggest he knows what I’m talking about. That is probably because I don’t state it too well. Still, I found myself deeply moved by the end of both Irreversible and Enter the Void (and to a lesser extent I Stand Alone), and the emotions I was feeling had nothing to do with futility or tragedy or anything like that; there is something uplifting – though not necessarily optimistic -- in Noe’s work. And the best explanation of it comes courtesy of my bud Theo Panayides, whose detailed, masterful take on Irreversible remains some of the best breakdowns of a film I’ve ever come across, anywhere. Money quote:


In short, the film is a journey from Birth to Death, which is also a journey from purity to corruption. So the film is deeply pessimistic. *But* it's told in reverse, with a "happy ending" - raising the hope that maybe we can somehow make our way back to purity, instead of constantly moving away from it. So the film is wildly romantic (because that hope is of course impossible). But there's also (very conspicuously) 2001, a journey from savagery to civilisation: each individual life is corruption, but mankind as a whole still makes progress. So the film is bittersweet and thought-provoking.

The only thing I’d quibble with here is Theo’s conclusion that “the film is bittersweet and thought-provoking.” Not because it’s not true, but because it doesn’t quite do justice to the rather more powerful and pronounced emotions on display. But you might have noticed that I get a little worked up over Gaspar Noe films.